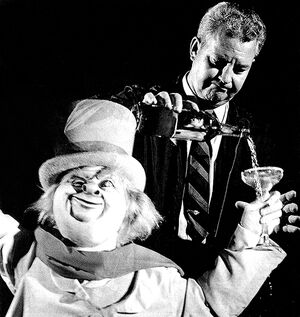 Yale Gracey was an Imagineer.

Role in the Haunted Mansion's development

Yale Gracey was not (or seldom) involved in the thematic development of the Mansion. He worked closely with the other Imagineers (most notably Marc Davis, Ken Anderson and Rolly Crump), being the special effects designer; his role was limited to rendering in reality the concepts thought up by the others.

A phenomenal engineer, Gracey invented several effects for the Haunted Mansion (such as the "Leota Effect"), while also reusing many 19th century magic trick, improved and enlarged (such as "Pepper's Ghost").

Like many imagineers, Yale Gracey received a tribute in the Family Graveyard that surrounds the entrance of the Mansion. His name appears on a tombstone as Master Gracey (which alludes to his being a "master" of special effects, although the term refers, in-universe, to a nobleman of young age, and has nothing to do with mastery of any kind). The epitaph is "Master Gracey, laid to rest/No mourning please, at his request." This seems to suggest that Gracey initially declined the offer of being given a tribute, probably on the ground that he was only an engineer while the others were the real creators.

Due to association of the "Master Gracey" tombstone with the concept of a "Master of the Mansion", the character was blown way out of proportions (being identified by fans as the Ghost Host, and a mythos being developed around the idea of a doomed wedding between Master Gracey and the Attic Bride), culminating in the 2003 film (and later the addition in 2012 of a sign bearing that name at the Walt Disney World Mansion) with the official retconning of the Haunted Mansion having originally been called Gracey Manor.

Retrieved from "https://hauntedmansion.fandom.com/wiki/Yale_Gracey?oldid=14323"
Community content is available under CC-BY-SA unless otherwise noted.