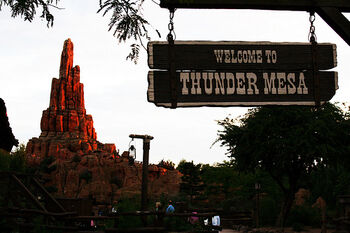 Thunder Mesa is the name given to the bustling Western boomtown that serves as the hub of Frontierland in Disneyland Paris, situated in the shadow of Big Thunder Mountain.

The lands of Thunder Mesa were originally a sacred place of the Shoshone people which revered the Spirit of Big Thunder or Thunderbird which inhabited Big Thunder Mountain. The town sprang up when gold was discovered in Big Thunder in 1849, and thrives off the ore produced by the Big Thunder Mining Company. The owner of the mine, Henry Ravenswood, built the foreboding Ravenswood Manor near the Boot Hill Cemetery.

Thunder Mesa remained a thriving place even in the wake of the 1860 earthquake that destroyed a good portion of the town, killing Henry Ravenswood, his wife Martha, the town's Sheriff, and the Mayor. The Ravenswood estate would fall into silence and decay following the demise of Henry and Martha Ravenswood, now known to the locals as Phantom Manor.

Much like the manor itself, the portion of Thunder Mesa that was leveled by the earthquake was abandoned, and later came to be known to the locals as Phantom Canyon.

The gold-filled mountain sacred to the Shoshone Tribe, who worshiped the Thunderbird said to inhabit the mountain. Henry Ravenswood started the Big Thunder Mountain Company in 1849 which was the main source of income for the town of Thunder Mesa.

Better known as "Phantom Manor", the Ravenswood Estate is the haunted mansion which looms over the town. It was once owned by the family of Henry Ravenswood, the owner & founder of the Big Thunder Mining Co. who kept his daughter Mélanie under a strict and watchful eye her whole life, was believed to have cheated on his wife Martha, and was responsible for the untimely deaths of at least four of his daughter's lovers. Henry and Martha both perished in the 1860 earthquake leaving the estate to their daughter who an unknown period of time later, became engaged to a foreman from Big Thunder named Jake who mysteriously disappeared before the wedding. According to town legend, Mélanie refused to believe that her lover would simply abandon her so she chose to stay within the manor and was never seen again.

Since then, the Manor has become a place said to be haunted by the ghosts of the Ravenswood Family and a spirit known as the Phantom. The manor fell into decay, the wildlife overgrew, ghostly dog howls could be heard coming from the grounds, and although the manor was abandoned, lights could be seen from the windows at night.

In the 1880s, the Thunder Mesa Town Council temporarily closed down access to the Ravenswood Estate in order to launch a missing-persons investigation as a result of several townspeople, tourists, and a robber named Milo Jones having disappeared on the manor's grounds. According to the Thunder Mesa Daily Messenger, the inquiry met its own set of setbacks and misfortunes, but the town council eventually relented to opening the paths to the manor once again, allowing the brave and curious to make their own decisions.

The town-cemetery of Boot-Hill is a burial-ground located adjacent to Phantom Manor. In the 1880s, the cemetery was run by a man named J. Nutterville. The term "Boot Hill" was a common term for cemeteries in the American Old-West with the implications being that it was for "those who died with their boots on", alluding to gunfighters who would kill and be killed.

Fort Comstock is the fortress which guards the main entrance to Thunder Mesa and was constructed for the settlers to be their primary defense against the Native American Shoshone tribe who they stole the lands from.

The area known as Phantom Canyon is the supposedly haunted region which holds the remains of the part of Thunder Mesa which collapsed during the 1860 earthquake. Is connected to a catacomb complex underneath Phantom Canyon and is completely inhabited by the animated rotted corpses of those who died during the earthquake. This part of Thunder Mesa is located just beyond the hill that Ravenswood Manor stands atop.

The oldest shop in Thunder Mesa which was built from back when the town was primarily inhabited by poachers, smugglers and farmers.

A saloon started in 1858 by Miss Diamond Lil which primarily served miners.

The landing for Thunder Mesa's steam-powered riverboats, The Mary Brown and The Mark Twain.

Retrieved from "https://hauntedmansion.fandom.com/wiki/Thunder_Mesa?oldid=14874"
Community content is available under CC-BY-SA unless otherwise noted.