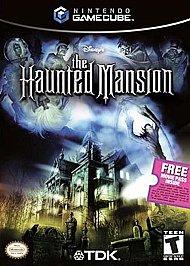 The Haunted Mansion is a video game that was released in 2003, based on the attraction and film of the same name.

A Renaissance-influenced nineteenth century antebellum/colonial revival mansion located in a bayou nearby New Orleans, Louisiana was a happy home to a family and resident ghosts until a cult of evil forces led by Atticus Thorn known as the Order of Shadows, terrorized the mansion including the family, causing them to abandon the home and forcing all its resident ghosts to serve his wills.

Author Ezekiel Holloway, nicknamed Zeke, was orphaned following his father's death and his mother's disappearance in the Civil War and lived in orphanages as well as several caretakers until he was old enough to live on his own. These experiences taught him the value of self-reliance and he has long dreamed of becoming a reputable writer. In order to do this, Zeke searches for a job in order to finance his passion. His desperation for a job leads him to discover a misleading newspaper advertisement about being a caretaker for the aforementioned mansion

Zeke makes the decision to take the job and journeys to the mansion on October 17, 1879. Upon examining the mansion on arrival, he is welcomed by six friendly ghosts, who are Atticus Thorn's slaves, causing him to faint in horror. When Zeke awakes, he meets a spirit in a crystal ball named Madame Leota, who informs him of the mansion's history and that Atticus Thorn has trapped 999 souls in the mansion as part of his attempt to take over the Afterlife and should be sent into the Depths of the Afterdeath. Leota also informs him on how to use the Beacon of Souls, a magic lantern that fires bolts of light to fight off evil forces, and adds that when at the hands of good, the Beacon can be used to stop or destroy evil.

Despite his fears, Zeke agrees to help them, and is given the weapon. He travels around the mansion, freeing shriveled ghosts and collecting legendary Soul Gems, the items that power up the Beacon, from the friendly ghosts. During the course of these events, Atticus Thorn watches with sadistic delight and occasionally appears to fight Zeke, who beats him successfully.

After fighting dozens of enemies, Zeke eventually gains a pirate's ring that unlocks a passageway to the Vault of Shadows, Atticus Thorn's secret lair behind a painting in the Foyer. Atticus reveals his plan to take over both the Afterlife and the Land of the Living, and he steals the Beacon of Souls from Zeke. Zeke and Leota face off against Thorn's true form, a giant, worm-like creature, in a massive battle. After Atticus' death, Zeke emerges victorious and is thanked by the friendly ghosts. The Haunted Mansion is finally returned to light, and the 999 spirits are set free and move on to Heaven. Zeke is employed as caretaker of the estate, and continues to live in harmony with the remaining ghosts along with Madame Leota. He then pursues his dream as a writer under Leota's guidance later on.

Ezekiel Halloway is a Louisiana young man desperately searching for work after the Civil War. Zeke grew up as an orphan, living with several caretakers throughout the years and is finally on his own. Zeke always felt lonely but had been used to it due to his parents' deaths. His father had died in the Civil War and his mother had gone missing shortly after. Zeke had to learn to fend for himself by his own ways. He'd always dreamed to become a writer and has written much but is stumped on what to write about in his current story. Zeke had always written about thrilling personal experiences yet hasn't had one in quite some time. Upon entering the mansion he discovers he has a story on his hands. That is - should he survive.

Throughout the mansion, Zeke uncovers lost entries of the chronicles of Atticus Thorn. As Zeke reads these, he learns that Atticus is the leader of a group entitled the Order of Shadows. The purpose of the Order of Shadows is to find the Beacon of Souls along with the legendary Soul Gems and use its powers to suck souls from the living and use their energy to conquer the Land of the Living as well as the realm of the dead, soon leaving nothing but food for worms. These chronicles date from 1342 to 1867, indicating Thorn's state of undead. Another league is the Brotherhood of the Soul, of which Madame Leota joined after being tricked by Thorn into joining the Order of Shadows and then realizing their deceptions. The purpose of the Brotherhood is to use any passed on soul energy for good and keep the Beacon safe from Thorn and his Order. As mentioned in one of Thorn's chronicles, "The Beacon had traveled through the valleys of Spain", the Beacon has been passed through regions of the Brotherhood all throughout the entire world.

The Friendly Ghosts are six of Madame Leota's friends who give soul gems, items that increase the beacon's power, after Zeke completes a certain level.

Atticus' minions and other enemies

Atticus Thorn imprisoned many souls and turned them into mindless, memory-less minions. Several varieties are listed below.

Scenes and rooms from the game

Great Hall: The starting room and the training area where the light switch is easily accessed. The only enemies here are the evil spirits.

Foyer: There are two staircases leading to the light switch that collapse when Zeke steps on them and the only route is through a painting. The small spiders are the enemies first introduced here. A grandfather clock for saving game progress is located here.

Conservatory: Zeke must activate a piano and climb on books to activate the cello and violin in the balconies to gain access to the switch. The Tome of Shadows Volume I can be read here.

Game Room: Zeke must defeat a giant spider which is the main enemy and pocket balls in a pool table to gain access the switch. The first upgrade of the beacon is found here. The duelist is introduced here.

Kitchen: After defeating the banshee ghost which is the enemy introduced in this level, Zeke must make a trail of wine in order to bring light.

Maid’s Room: The room acts like a maze with walls that move and create a limited view and Zeke must find 4 doors leading to the switch. The Tome of Shadows Volume II can be read here.

Dining Room: The light switch is easy to access to here, but when Zeke activates it, the candles in the chandelier start floating around the room and Zeke must chase them to bring light. Once he has all of them lit, he should jump to the lowered chandelier to light up the room.

Ballroom: When the organ sends strong wind to hold Zeke back, he uses spider webs here to access it where the switch is behind it. Atticus Thorn is first fought here. The second upgrade of the beacon is found here. The Organist's ghost is introduced here.

Winter Garden: Zeke avoids the falling floors here to get the water fountains to the proper gratings.

Graveyard: Zeke must activate the singing busts to raise the mausoleum and crypts and light up the area. The skeleton warriors are the enemies first introduced here.

Mausoleum: Zeke must battle the Gargoyles and sidekicks in 3 minutes. The Tome of Shadows Volume III can be read here.

Pantry: In this room, a portal begins the next battle. This is the second encounter with Atticus Thorn. The third upgrade is found here. The Beheaded Knight's ghost is introduced here.

Upstairs Hallway: The next hallway in the game. It is either accessed in the Foyer or in the Downstairs Hallway. A third grandfather clock for saving game progress is located here.

Study Room: Zeke must step on the round carpets to make the furniture (bookshelves, desks, chairs, etc.) lead to the light switch which is above the cupboard. The Tome of Shadows Volume IV can be read here.

Toy Room: Zeke must walk by using the ball to get the switch which is inside the toy box.

Trophy Room: The fireballs thrown by the fireplace that Zeke must shield himself with shields are used to light up the room. It can be used to defeat some enemies if they appear. The knight ghosts are the enemies first introduced here.

Sun Room: Zeke must arrange the mirrors to make light and this is the third encounter with Atticus Thorn. The fourth upgrade is here. The Opera singer's ghost is introduced here.

Sitting Room: Zeke must chase the light switch to its place.

Museum: Zeke must make it through a chessboard like game without walking in front of a knight. The Tome of Shadows Volume V can be read here.

Children’s Room: Zeke must survive while being helped by Madame Leota in the chase in the closet. The enemy first introduced here is the Dark Reaper.

Parlor: Zeke must step on the circular carpets to arrange the walls leading to the switch. This is the fourth encounter with Atticus Thorn. The final beacon upgrade is found here. The Old Lady's ghost is introduced here.

Gallery: Zeke must change the evil paintings to good, by walking past them, to turn the lights on.

Observatory: Zeke must jump from every obstacle to gain access to the light switch.

Attic: The enemies introduced in all levels are finally fought here. The cranks Zeke turns brings light to the room. The Pirate's ghost who is introduced here gives Zeke a pirate ring which is the key to the Vault of Shadows. The Tome of Shadows Volume VI can be read here.

The Stretching Room: This serves as the entrance to the Vault of Shadows. The only enemies here are Atticus' worms.

The Vault of Shadows: The final level of the game. Zeke must defeat Atticus Thorn twice who is a gigantic insect like creature. After that, The next area is a lava pool where Atticus, after being defeated submerges in flames.