The Haunted Mansion is a 2003 American fantasy comedy horror film based on the Disney theme park attraction of the same name. Directed by Rob Minkoff, the film is written by David Berenbaum and stars Eddie Murphy, Terence Stamp, Nathaniel Parker, Marsha Thomason, and Jennifer Tilly.

In the nineteenth century, wealthy landowner Gracey is the proprietor of Gracey Manor. When he falls in love with a multiracial woman named Elizabeth, the Gracey family butler Ramsley views his actions to be disgraceful and misleads Gracey into believing that his love spurned him. Gracey later hangs himself in despair after believing her death by poison to be suicide when he reads a letter which supposedly was addressed to him by Elizabeth wherein fact, the letter was penned by Ramsley himself.

In the present day, successful realtors Jim and Sara Evers own a real estate firm and are happily married with two children, Megan and Michael. However, Jim's workaholism and continuous pursuit for new business deals causes him to have little time for his family. After missing his own wedding anniversary to seal a business deal, Jim makes amends to his family that they go on a weekend away to a nearby lake. Before they can go on the trip, Sara is contacted by the occupants of Gracey Manor, located in the bayou swamps of New Orleans. An eager Jim drags his family along to do business at the house. They meet Master Gracey, his stern butler Ramsley, and two servants Emma and Ezra. Gracey invites the family to stay the night after a rainstorm floods the river. Jim is taken to the library by Ramsley to discuss the deal with Gracey but when he waits, he becomes trapped in a secret passageway. Michael and Megan encounter a "ghost ball" which leads them to the mansion's attic where they find a portrait of a woman resembling Sara and are confronted by Ezra and Emma, the latter revealing the woman's names as Elizabeth. Sara converses with Master Gracey in the library and as Gracey gives her a tour of the mansion, he explains that his ancestor's lover Elizabeth Henshaw seemingly committed suicide via poison, and his ancestor followed suit via hanging despite their plans to wed.

While trying to find a way out, Jim encounters a Romani woman named Madame Leota, whose head is encased in a crystal ball. After briefly being scared away, Jim and his children return to her for answers of Elizabeth's likeness to Sara. They eventually learn that all of the mansion's residents are actually ghosts, cursed a century ago by Gracey and Elizabeth's suicides and can only move to Heaven when they are reunited, and Gracey believes Sara is Elizabeth's reincarnation.

In order to break the curse, Madame Leota sends the Evers family, minus Sara, into the mansion's expansive cemetery to fetch a key that Madame Leota claims will reveal the truth behind Elizabeth's unusual death. Jim and Megan venture to a crypt beneath a mausoleum where they locate the key, but inadvertently disturb all of the mausoleum's undead residents. They escape unharmed with Michael's help, who overcomes his arachnophobia. Madame Leota leads the family to a trunk in the attic, where Jim finds an old letter from Elizabeth to Edward with the promise of marriage, revealing that her suicide was false.

Ramsley appears and reveals himself to be the mastermind of the curse and that he murdered Elizabeth with a poisoned goblet of wine to prevent Master Gracey from abandoning his home and heritage, believing that their relationship was unacceptable due to Elizabeth herself being a woman of color. To hide the truth, he traps the children in a trunk and literally throws Jim out of the mansion, enchanting the mansion to prevent Jim from breaking in.

As Gracey and Sara rendezvous in the ballroom, the former asks Sara if she can recognize him which confuses her. Desperate, he insists to Sara that she is his beloved Elizabeth. The room fills with dancing ghosts of the past which causes Sara to flee. As she runs up the stairs, Gracey reveals his true ghostly self to Sara begging her to understand and that they can finally be together. Sara insists that she is not Elizabeth, but Gracey continues to persist. As Gracey begins to have second thoughts, Ramsley insists that it is her and in time she will remember. Ramsley tells Sara to get ready for her wedding to Gracey but Sara refuses. He then blackmails her into marrying Gracey in return for her children's safety.

During the wedding ceremony, Ramsley poisons Sara's drink so that she will die and return as a ghost and end the curse. Outside, Madame Leota gives Jim the confidence to break in again using his car. They successfully do so by crashing through the conservatory, thus causing so much damage that the curse cannot repair it before he enters the house. Jim saves his children and stops the ceremony. He gives the letter to Master Gracey, revealing to him the truth about Elizabeth's death and that Ramsley had lied to him about it all those years. As Gracey rages at Ramsley for what he had done, an enraged Ramsley reveals that despite all his work to care for the family, he was angry at his master's apparent selfishness for loving Elizabeth and summons wraiths to kill the group, but a fiery dragon emerges from the fireplace during the chaos and drags Ramsley into Hell for his actions. Ramsley seizes Jim and attempts to pull him down with him for ruining his plans, but then Master Gracey rescues Jim and the two watch as Ramsley falls through the fiery pits.

Sara succumbs to the poison, but the ghost ball arrives and possesses her body, revealing itself to be Elizabeth's ghost. Elizabeth and Master Gracey kiss, and Sara is revived. In gratitude and seeking redemption, Master Gracey gives the Evers the deed to the house, allowing them to do what they want with it as long as they remain happy. The ghosts all depart the mansion and move on to Heaven.

The film ends with the Evers driving off to a proper vacation on the Lake Pontchartrain Causeway, accompanied by Madame Leota and the four Singing Busts, which Jim and the kids met earlier, who end the film with their own rendition of When the Saints Go Marching.

This wasn't the first attempt at adapting The Haunted Mansion into a film. Back during the early 1990's, screenwriters Jim Hill and Sheila Greenberg pitched a script to then Walt Disney Pictures head Jeffrey Katzenberg, who, at that time, was interested in adapting Disney Parks rides into movies. The mythology and myth-laden script circled through the studio for several months, but was dropped due to the box-office failure of the supernaturally-based comedy, Hocus Pocus.

In 1997, the project was picked up again, this time by Keystone Productions. It was not, however, a theatrical release, but rather, as a TV movie to be shown on "The Wonderful World of Disney" in the Fall of 1998. However, Keystone's other theme park TV movie, Tower of Terror, didn't pull in decent enough ratings, which resulted in both ABC and Keystone dropping the project. [1]

In the spring of 2000, there was, yet again, renewed interest in adapting Disney Parks attractions into motion pictures. Brigham Taylor, Walt Disney Studios Vice President of Production, and Nina Taylor, President of Buena Vista Motion Pictures Group, selected three attractions to be adapted to film: The Country Bear Jamboree, Pirates of the Caribbean, and The Haunted Mansion. Along with Pirates Of The Caribbean, the film was scheduled for a 2003 release.

Instead of using the Hill-Greenberg screenplay, Taylor and producer Andrew Gunn decided to create a new screenplay from scratch. They hired staff writer David Berenbaum to create a script that incorporated and expanded the attraction's original story and source material. Berenbaum spent months on several story treatments, making small changes and adjustments. For example, the Mansion's location changed from upstate New York to upstate New Orleans, and the character that later became Jim Evers was changed from an attorney to a real estate agent. After settling on a story that later became the plot for the final product, Berenbaum spent the next two years working on the script. After many drafts and rewrites, studio executives approved the final draft.

The studio selected Rob Minkoff to direct for various reasons. 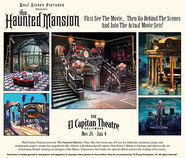