The Haunted Mansion: 30th Anniversary Limited Edition Compact Disc was a soundtrack album released for the 30th Anniversary of The Haunted Mansion. The original 1999 CD was a 13-track limited edition of only 999 copies, all sold out within two hours at Disneyland's special event for the Haunted Mansion's 30th anniversary. It featured a green disc showing the 13 hour clock face, a 5-page artwork insert, and an extra 1-page insert featuring autographs of Buddy Baker and X. Atencio, the men who wrote Grim Grinning Ghosts.

The second edition, also from 1999, immediately followed but without the 13th track. It featured a gold disc, the same 5-page artwork insert, but no 1-page extra insert with the autographs.

The third edition from 1999 featured a standard silver disc, also had the same 12 tracks as the second edition, had a simpler two page foldout artwork insert (same second edition front picture with different wording; the back cover was slightly re-arranged), and no 1-page extra insert with the autograph.

A 2006 version (fourth edition) with 11 tracks was released without the Phantom Manor track, but added a Disneyland 10th Anniversary cut. Walt Disney's Welcome is missing. It has a cover featuring the gate plaque on the brick columns outside of the Haunted Mansion. 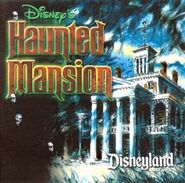 1999 Third Edition Cover
Add a photo to this gallery
Retrieved from "https://hauntedmansion.fandom.com/wiki/The_Haunted_Mansion:_30th_Anniversary?oldid=13146"
Community content is available under CC-BY-SA unless otherwise noted.