The portrait of The Flying Dutchman can be found in the Portrait Corridor of the Haunted Mansion and Phantom Manor.

Legend has it that the Flying Dutchman was the name of a ship that sailed over 300 years ago for the Dutch East-India Trading Company. According to the legend, in 1641 the ship was attempting to make its way around the Cape of Good Hope when it was beaten back by storms. The ship's captain - referred to as Captain Hendrick van der Decken in many of the stories - supposedly pushed the crew to keep sailing despite the treacherous seas, vowing that he would not stop until he made it 'round the Cape and cursing the powers-that-be for trying to halt him. The ship was eventually lost in the tempest, but Van der Decken held true to his promise; some say that the ghost of the Flying Dutchman still sails the seas, cursed to never again make port and whoever sees this apparition will be cursed with a streak of bad luck.

In an alternate telling of the story the captain was a Dutchman by the name of Bernard or Barend Fokke who sold his soul to the Devil in-exchange for his voyages to have unnatural speed. The ship was wrecked in an ethereal tempest and since then the ship and it's crew was damned to roam the seas forever.

Pirates of the Caribbean (film series)

In the film franchise Pirates of the Caribbean which Phantom Manor's Dutchman is based upon, the Flying Dutchman is reimagined as the ship used by the death-god Davy Jones to ferry the souls of those who die at sea to the afterlife. Jones was given the ship by his lover, the sea-goddess Calypso with the gift also causing Jones to only be able to step on land once every ten years. After his first ten-years passed, Calypso was not there to meet Davy so he stopped performing his sacred duties out of rage and heartbreak and used the ship for evil.

The Portrait appears in every version of the ride except for Mystic Manor, where the portrait appears in Portrait Corridor alongside the other changing portraits where the painting, depicting a three-masted vessel on calm seas, transforms into a ship with tattered sails in the midst of a squall.

The sign for the Flying Dutchman appears in the Columbia Harbour House restaurant of Liberty Square. This area is decorated with maps of American shipwrecks and artwork of ghost-ships with a window overlooking the Haunted Mansion.

Pirates of the Caribbean's Flying Dutchman

The Flying Dutchman from the films used to be on display in this private-island resort.

Pirates of the Caribbean: Battle for the Sunken Treasure

The Dutchman appears in person in the Shanghai-Disneyland ride, "Pirates of the Caribbean: Battle for the Sunken Treasure". Here guests travel through the ship at the bottom of the Ocean where they come upon Davy Jones playing his pipe-organ. The guests assist Jack Sparrow in robbing the Dutchman of a massive treasure made up of artifacts from all over human history before Jones raises a fleet of sunken ships to attempt to retrieve it. The ship proceeds to rise from the depths where it engages in a cannon-fight with the Black Pearl only for Jack to get away with the gold. Unique to this incarnation, the Dutchman has a human skeleton serving as a figure-head, similarly to Blackbeard's ship The Queen Anne's Revenge from Pirates of the Caribbean: On Stranger Tides.

Unused concept-art by Marc Davis showing the ghostly crew of the Flying Dutchman.

The Flying Dutchman aflame as it appears in Phantom Manor 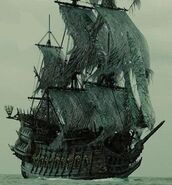 The Dutchman as it appeared in the Pirates of the Caribbean film-series.

The Dutchman's theme-park appearance in Pirates of the Caribbean: Battle for the Sunken Treasure 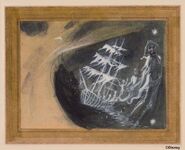