The Staring Wallpaper is purple with several strange designs, resembling eyes and faces. When seen in the black abyss-like darkness in much of the mansion, the eyes are clearly being possessed by spirits who stare at the guests with only their eyes visible.

The design of the wallpaper was created by imagineer Rolly Crump for his Museum of the Weird attraction where it was the design for a monstrous plant which would grow out of a pot and fly away.[1]. While the plant was never featured in an attraction, the design was later adapted for the Haunted Mansion by imagineer Claude Coats.[2][3]

In the Disneyland Haunted Mansion, the wallpaper can be found within the Corridor of Doors and Conservatory scenes.

In Liberty Square's Haunted Mansion, the wallpaper can be found right after the Endless Staircase sequence. Initially it resembles illuminated white eyes in pitch-blackness, staring and blinking at guests while whispering. As the Doom Buggies pass by, the eyes are revealed to be part of the wallpaper as guests enter the Corridor of Doors.

In Phantom Manor, the wallpaper can be found almost immediately guests board their Doom Buggies and then throughout the Endless Hallway, Music Room, and Corridor of Doors of Ravenswood Manor. Here the eyes glow green within the corridor of doors, blinking on and off rather than having the more seamless transition of Walt Disney World's mansion.

In the episode House Ghosts, the wallpaper appears taking up the background as Pete is terrorized by the ghosts of the Haunted Mansion.

A Muppetized version of the wallpaper appears in the special, incorporating the faces of Gonzo, Pepe the King Prawn, Uncle Deadly and Beaker into the design.

The Wonderful World of Mickey Mouse

In the episode "Houseghosts", the wallpaper appears when the Lonesome Ghosts have completely redecorated Mickey's house into a haunted mansion.

The wallpaper makes an easter-egg appearance in this attraction, with the pattern appearing on the shapeshifter Randall's skin as he gets attacked and has his patterns change wildly.

The wallpaper serves as a common staple of Haunted Mansion themed paraphernalia, namely in that which is aimed towards articles of clothing or accessories. The design was featured on the clothing print of the character Gracey made for Disney's Attractionista's doll-line. The wallpaper's design is also is featured on phone-cases, mugs, pouches, boxes, and the background artwork of fandom wikis; always watching. 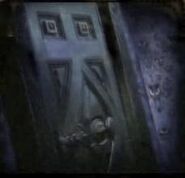