The Skeleton, also known as by the semi-official name Ezra, is one of the ghosts haunting the Haunted Mansion.

The Skeleton is one of the three Hitchhiking Ghosts alongside the Traveler Phineas and the Prisoner Gus. He wears a hat, a large bow tie, and has a very skeletal appearance. The original animatronics for the character are bald while the Walt Disney World version has messy white hair. It is implied in the Walt Disney World version of the attraction that in the afterlife he has traveled all over the world, almost like a macabre undead tourist.

The original concept sketch for the character was done by Marc Davis, depicting a smiling “sheet ghost” with no clothing aside from a bowler hat. The character evolved, from sketch and miniature model form, to a fully-clothed ghost that resembles a dessicated, emaciated corpse, with a different style of hat (although he is still depicted wearing the bowler hat in merchandise items).

Blaine Gibson sculpted the figure and it was costumed by Alice Davis. The figure's head mould is known as the Leering Head and is used for several characters in the Haunted Mansion, notably the Hatbox Ghost. In cartoons, posters and merchandise he is shown to have a round bowler hat which is replaced with a different kind in the final attraction.

In the Magic Kingdom's 2011 enhancement of the Haunted Mansion in Walt Disney World the Hitchhiking Ghosts were given new effects and figures. This new (but now fairly dated) effect used a CGI projection of the Hitchhiking Ghosts in the mirror rather than animatronics and had them be given new characterization. It was stated in Jason Surrell's book The Haunted Mansion: Imagineering a Disney Classic that the reference for Ezra's personality in this appearance were actors Jim Carrey (likely in his role as the paranormal anti-hero, The Mask in the 1994 film of the same name), John Cleese and Michael Keaton (namely as the titular character in Tim Burton's 1988 dark-comedy Beetlejuice).

The Skeleton Hitchhiker appears at the very end of the Haunted Mansion in the Mausoleum where he is shown hitchhiking alongside the Traveler and the Prisoner and directly following he can be seen in the reflection of the guest's Doom-Buggy preparing to follow them home until they return to help fill the Mansion's quota.

A tombstone dedicated to Ezra can be seen outside of the Haunted Mansion alongside those for Phineas and Gus. As previously stated, he has a different design in this attraction and interacts with guests in their doom buggies' mirrors.

A counterpart to the Skeleton with the same head mould as Ezra shows up as a ticket-master in Phantom Canyon, offering passes for the local ghost train. Fans and cast members have frequently dubbed this character "Ezra" as well.

One of the three ghosts will appear in photographs taken by Walt Disney World photographers in-front of the Haunted Mansion.

In the Ghost Post interactive game, he is referred to as Ezra and can be heard on the Phantom Radio along with Phineas and Gus. He is voiced by Pete Renoudet, who played the Ghost Host in the album The Story and Song from the Haunted Mansion.

The Hitchhiking Ghosts appear on the artwork for one of the gondolas in Walt Disney World's Disney Skyliners.

In the House of Mouse episode House Ghosts, he and the other Hitchhiking Ghosts perform Grim Grinning Ghosts to scare Pete.

Ezra is one of the common enemies in the Haunted Mansion levels of this game.

In the mobile game Disney Crossy Road, he is given the name Ezra Beane. 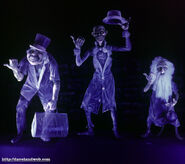 Add a photo to this gallery
Retrieved from "https://hauntedmansion.fandom.com/wiki/Skeleton?oldid=18034"
Community content is available under CC-BY-SA unless otherwise noted.