The Sinister Eleven are a group of haunted portraits located at the Haunted Mansion.

The Magic Kingdom's Haunted Mansion once had this effect prior to the 2007 refurbishment. Now it has a Portrait Corridor similar to Disneyland's. The Arsonist, Jack the Ripper, The Mariner, Hatchet Man, The Witch of Walpurgis, Dracula, and The Old Man are now hanging in the Load Area, while The Couple and December are hanging on the staircase near the floating candelabra, and The Opera Glasses Lady hangs on the wall between the Ballroom and the Attic. With Medusa becoming a changing portrait, her Sinister Eleven portrait ended up in the Disney Archives. While most of these portraits are still present in the mansion, their eyes no longer glow and follow the guests as they move past them.

In Tokyo Disneyland, the effect remained identical to what it used to be in WDW before 2007: guests travel down the Portrait Hall in a doom buggy, just after passing under the candelabra landing. There, the subjects of the portraits stare back, their eyes dimly glowing and following guests as they proceed down the corridor. The portraits consist of:

During the Holiday season, the portraits are replaced with ones of characters from "The Nightmare Before Christmas", all of whom watch the guests as ride by.

There are two non-changing portrait, Sinister 11 type portraits which would never be put in the final attraction, those being of historic figures:

Asides from these two there are several changing portraits which could have been considered to be used as Sinister 11 style portraits.

The woman that turned into a tree. 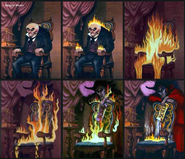 From Rasputin to Cyclops. (He would later become the beared man.) 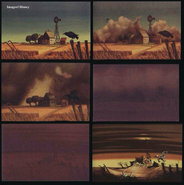 The twister (note that even the crow got killed in the process.)

Crazy carver (this one could have been a prototype for Constance).

An unfaithful woman.
Add a photo to this gallery
Retrieved from "https://hauntedmansion.fandom.com/wiki/Sinister_11?oldid=14016"
Community content is available under CC-BY-SA unless otherwise noted.