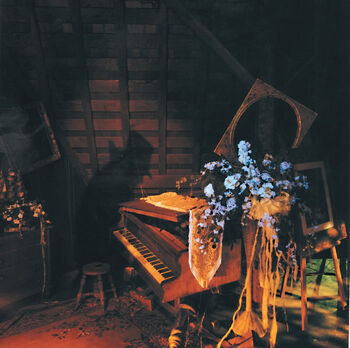 The Shadow Pianist also referred to as the Attic Pianist is one of the ghosts haunting the Haunted Mansion.

The Shadow Pianist is a ghost who can only materialize as a shadow. They are quite proficient at playing the piano and do so even in death.

Only in Walt Disney World and Tokyo Disneyland, there is a Music Room where the shadow of an invisible ghost pianist is projected on the wooden ground.

The Shadow Pianist appears in the Attic of the Mansion in the Disneyland ride. He appears as a cloaked shadow wearing a top hat and a high collar, playing a dissonant, slowed-down version of Here comes the bride. The audio of the piano is heard in the Walt Disney World attic, though the piano and shadow are absent. It is likely that this pianist tableau was inspired by the Music Room of Walt Disney World's Haunted Mansion which Disneyland did not have.

In the cast-member made Ghost Gallery storyline, the Liberty Square, Music Room version of the pianist is named Ludwig von Baroketch and is said to have been an alcoholic composer who made a bargain with the Angel of Death to extend his life in exchange for Ludwig composing a piece dedicated to the angel in 13 days. After the 13 days Ludwig failed to finish Death's Symphony and wound up not only being claimed by the Angel, but being cursed by it to haunt his piano for eternity forever composing.

Some have taken it a step further and believe the Music Room pianist and the Attic shadow pianist to outright be the same character.

Interestingly, according to Imagineer Jason Surrell, the Music Room pianist is none other than the Ghost Host himself. If this is true, then the connection becomes impossible, as the Ghost Host clearly states before the guests enter the attic that he is going off partying for a little while and that they must now tour alone, only meeting again with them at the end of the Graveyard Jamboree ("Ah, there you are!"), which means he couldn't be in the attic at the same time.

One of Constance's Husbands

One theory is that the piano player is the ghost of one of Constance's husbands. Given the silhouette of the top hat if this theory is true it could be the spirit of Frank Banks, Reginald Caine or George Hightower as they were the only ones who wore top hats. The piano itself also is found in the Reginald Caine segment of the attic meaning it could be his ghost but the Mansion itself was owned by George so it could be his spirit. On the other hand the silhouette doesn't seem to look much like any of the husbands in body structure or fashion as well as the question of why only one of the five spirits would materialize.

Another theory is that the piano player was an accomplice of Constance who travelled with her to every marriage helping her carry out the crimes without getting caught by posing as the wedding musician.

Retrieved from "https://hauntedmansion.fandom.com/wiki/Shadow_Pianist?oldid=16613"
Community content is available under CC-BY-SA unless otherwise noted.