Ezra
The Beheaded Knight
The Executioner

Augustus "Gus" Gracey (Ghost Gallery)
The Prisoner, also known by the semi-official name of Gus, is one of the three Hitchhiking Ghosts. He is the only of the hitchhikers to make an appearance twice in the ride.

The Prisoner is a short, dwarf-like figure. He has a long beard and a ball and chain shackled around his ankle. In the graveyard, he is seen with a metal file, which he possibly used to saw his prison bars away in his escape. He is one of the three Hitchhiking Ghosts alongside Ezra the Skeleton and Phineas the Traveler.

The name of "Gus"for the Prisoner was initially coined by Cast Members and fans, along with those of Ezra for the Skeleton and Phineas for the Traveler. This name has since become adopted by Haunted Mansion media.

In 2011, the Walt Disney World version of the attraction put in an animated effect in the exit crypt with more defined characterization. As explained by former imagineer Jason Surrell, the new portrayal of Gus was inspired by actor Christopher Lloyd's character Reverend Jim from the sitcom Taxi.

The Prisoner first appears in the Graveyard, standing next to the Executioner and the Beheaded Knight. He sings Grim Grinning Ghosts with a deep, gravelly voice provided by Candy Candido, in contrast to the Executioner's high pitched one. For the 2007 "Re-Haunting" of WDW's Mansion, he received new vocals and now sings some lyrics slightly differently, i.e., "When the crypt doors creak and the tombstones quake, Spooks come out for a screaming wake", as opposed to the normal "Spooks come out for a swinging wake".

Shortly after this appearance the Prisoner appears once again alongside the Skeleton and Traveler Hitchhikers where the three of them hitchhike onto the guest's Doombuggies in order to follow them home and haunt them until they return to the Mansion in order to help fill the Mansion's quota.

In 2011 at Walt Disney World's Mansion, an epitaphless tombstone with the name Gus debuted on the hillside adjacent to the queue. Especially considering that "Ezra" and "Phineas" tombstones were also added at the same time, it is most likely meant to be referring to the fan nickname.

One of the three ghosts will appear in photographs taken by Walt Disney World photographers in-front of the Haunted Mansion.

In the limited interactive mystery game, Ghost Post, the southern hitchhiker named Gus is heavily implied to be the prisoner.

The Hitchhiking Ghosts appear on the artwork for one of the gondolas in Walt Disney World's Disney Skyliners.

In the Ghost Gallery, his name is Gus Gracey and he is said to be a distant relative of the Ghost Host (who in this version of the story is also Master Gracey). In his story, Gus is an insane serial killer who killed his own parents after they had him imprisoned in a lunatic asylum for his murderous tendencies.

Gus eventually came to Gracey Manor where he was imprisoned on it's grounds by the Ghost Host and Madame Leota in order to protect the Gracey family's name, he died when he tried to kill a stray cat with his ball-and-chain but accidentally missed and through it down a well causing him to drown.

In the SLG comics, Gus's backstory is given in the story "The Big Nap". He was a sleepy shepherd that became frustrated with the noise of his sheep. After throwing a fit and escaping an angry ram, he tumbled into a wedding and knocked over the wealthy groom and was arrested, gaining his ball and chain. Trying to rest in prison, he was interrupted by the sounds of cannon-fire as the prison fortress came under assault by a crew of pirates. He was able to escape and use a cannon to launch himself on a pirate dinghy. Rowing towards a desert island however, his ball ended up falling overboard, causing him to drown. His spirit soon found its way to the Mansion where he hoped he could rest in peace, but the constant noise of their celebrations lead him to take up hitchhiking for quieter territory.

The implication of this story was that he was inhabitant of the island attacked by the Wicked Wench in the Disney attraction Pirates of the Caribbean (an island officially named Isla Tesoro). It infers he was a prisoner of the Castillo del Morro fortress prison from the ride, best known for its prison dog which holds keys in its mouth.

In the mobile-phone-only video game, the name of Gus is used for the Prisoner.

The Prisoner is played by Kenyan-born Anglo-Indian dwarf actor, Deep Roy, in the 2003 film. He is shown to accuse Jim Evers as a "liar" and "psychic" when the Traveler asks if the mortals can see them. Unlike the ride, the Prisoner was one of the groundskeepers of the mansion, evidenced by the absence of his ball-and-chain.

Box of the pin

The Hitchhiking Ghosts (including the Prisoner) on House of Mouse. 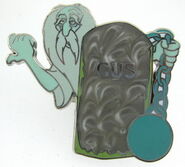 Add a photo to this gallery
Retrieved from "https://hauntedmansion.fandom.com/wiki/Prisoner?oldid=17996"
Community content is available under CC-BY-SA unless otherwise noted.