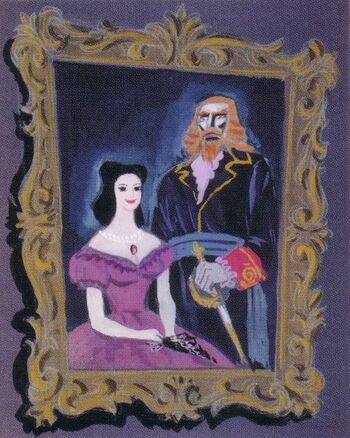 Priscilla was the name of a character from early concepts for a Disneyland haunted house attraction by Imagineer Ken Anderson.

The most solid part of her backstory was that she had married to a wealthy sea captain, Bartholomew Gore (or Gideon Gorelieu, depending on versions of the story). While the captain was away on a voyage, Priscilla opened an old sea chest in the mansion's attic and found her husband's true colors: that he was in reality a notorious and bloodthirsty pirate. Upon confronting her husband with the truth, Priscilla met a gruesome end at his hand; from that point onward, the story is split in several versions.

In one of the walkthrough versions of the ride hosted by Beauregard the Butler, the guests' attention is at that point of the attraction called to a well in the Mansion's backyard. He says (or suggests) that rumors have it that Gore drowned Priscilla in the well. The guests are then invited to look down the well: the water is, indeed, blood red.

In a later version of the story, Gore walled Priscilla up in a chimney, and then went on with his piracing career, albeit haunted by Priscilla's vengeful spirit. He then drowned at sea. At one point of the ride, the guests would wind up in the captain's room: the pirate's ghost would appear, soaked up with sea water and covered in shellfish and seaweed (the visual concept was later reused for the Mariner portrait), laughing mad; Priscilla, a few minutes later, would emerge from the chimney in a skeletal form, screaming. The moment she made contact with Gore, they would both disappear. This version of the tale was very seriously considered, and the room was actually built by Yale Gracey and shown to Walt Disney, complete with all the special effects. However, the room eventually could not be incorporated in the ride because it was designed for a "walkthrough" type of attraction, and took too long for a ride.

In a possibly apocryphal but often-reproduced version of the tale, Priscilla's haunting of Gore eventually drove Gore mad; the pirate captain hung himself in his Mansion's cupola. In this version, Gore would be the Hanged Man of the final attraction, and quite possibly the Ghost Host himself. This story might not have been intended by the Imagineers, but became quite popular and was eventually reworked into the story arc of Captain Blood and Emily de Claire in the SLG comics' backstory for the Mansion, Mystery of the Manse.

Some of Priscilla's character was retained for the Bride in the finished attraction, especially the versions of her backstory told in Mystery of the Manse and Nuptial Doom.

She also made a cameo in the Marvel comics, appearing next to her husband Captain Gore in a portrait of Gore shown to Danny Crowe. However, even though Priscilla might still have been Gore's doomed bride in this version of the tale, the rest of the backstory can probably no longer apply; in this version, Gore never owned the Mansion, and drowned in the flooded basement in a quest totally unrelated to Priscilla.

A 'Priscilla' tombstone also exists in the Walt Disney World Mansion as a tribute to the character.

Retrieved from "https://hauntedmansion.fandom.com/wiki/Priscilla?oldid=13027"
Community content is available under CC-BY-SA unless otherwise noted.