Pop-Up Ghosts are a group of characters in the Haunted Mansion.

The pop-up ghosts are used to scare guests as they pass by from quickly popping up from their hiding places and then sinking back down to scare another guest. They are most predominately found in the graveyard, though there were temporarily some Pop-Up Ghosts in the Attic.

The Blast-Ups are on thin wires and a blast of air shoots them into the air. They are apparently also known as the Rocket Skulls.

Except for the Leering Skull, they are all sculpted to appear as though they are screaming.

The pop-up ghost appear in every incarnation of the Haunted Mansion, excluding Phantom Manor and Mystic Manor. Additionally in all of their appearances they also can be seen in the Corridor of Doors sequence within the, "Family Portraits" photographs hung on the wall. Namely, the old hag, the winking skull, and droopy eyes. The leering skull isn't necessarily featured by the head-mould is used for depictions of the Hatbox Ghost in the photos.

When the Haunted Mansion at Disneyland opened in 1969, there were five pop-up ghosts in the attic. They were all in the current location of the groom portraits. On the right side there was a Blast-Up and an Old Hag, and on the left were an Old Hag, a Blast-Up and another Old Hag. The Old Hags popped out from inside trunks and the Blast-Ups popped out of hatboxes. Except for the Blast-Ups, they were dressed in white sheets and screamed as they came up.

In 1995 during the same renovation that gave the Bride a face and added the Shadow Pianist, the pop-ups were given new, "I do!" vocal tracks, mimicking groomsmen. They were removed in 2006 with the addition of Constance, though the three pop-up mechanisms are still in place and are used during the Haunted Mansion Holiday overlay, for the three jack-in-the-boxes scattered about.

At the Magic Kingdom, on the right side the pop-ups were a Winky Skull and an Old Hag. On the right side they were Droopy Eyes, a Winky Skull, and an Old Hag. Like Disneyland, they were dressed in white sheets and screamed. In 1996 during the refurbishment that gave the Bride a blue childlike face, the pop-ups were re-dressed in over-sized top hats and tattered tuxedos to resemble groomsmen.

The screams were left intact. For reasons unknown, the trunks that the pop-ups came out from inside were removed, so now they all came out from behind piles of junk. The five were removed in 2007 for the refurbishment which incorporated in Constance Hatchaway. It is unknown at the time of writing if the mechanisms for the ghosts still remain as they do in Disneyland.

Tokyo reuses the mould of the droopy-eyed ghost in the Corridor of Doors, being the head mould of a gentleman whose face emerges from a portrait.

The Tokyo Disneyland Mansion still has pop-ups in their attic in the same place as the WDW pop-ups were. Unlike their Florida counterparts, they still pop-out of trunks and retain their original shrouds. They also still have their original scream recordings with them.

In the cast-member created Ghost Gallery storyline, three of the Pop-Up Ghosts are said to have been named Silas Grunge, Emmett Totts, and Felicia Scratch. They are said to be the three first spirits summoned by Madame Leota in her quest to open up a portal to the Spirit World.

Silas was the result of a small child seeing a dead body in a river and going into cardiac arrest. The ectoplasm imprint of the child's arrest was personified into the being which became known as Silas Grunge.

Emmett Totts was the ghost of an apple farmer whose failures left him a broke hermit. He died while trying to scare a group of children which he believed were robbing him, only to find they left a mirror up which scared him to death at the sight of his own reflection

Felicia (the hag) was a failed witch who was frequently mocked for her incompetence at the dark arts. Obsessed with seeking repute, she began using special effects and illusions to try and frighten the villagers of her region. This worked, albeit too well and resulted in a fire carriage running her over, killing her.

In a 2015 commercial for Disneyland's Halloween season featuring the Disney Villains, a pop-up ghost in a night-cap popped up and attempted to scare Maleficent. In unfazed retaliation, Maleficent transformed into a dragon and blew hot fire at the ghost, leaving it singed and mortified of the Mistress of all evil.

A Pop-Up Ghost served as the first interviewee in the "Walt Disney World Goat Friends" YouTube series. Staying in character, he answered the Goat's questions with quick single word answers as he popped up from the gravestone. When the goat offends him by admitted he's not that scared of him, he stays silent behind the tombstone as the Goat tries to apologize before leaping directly in front of the camera screamer video style. 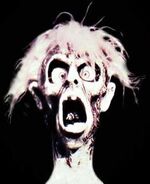