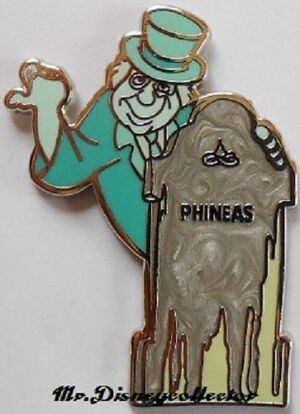 Phineas is the fan-generated semi-official name of the Traveler Hitchhiking Ghost.

The name Phineas was unofficially created by Cast Members as a name for the Traveler Hitchhiking Ghost, along with the names of Gus and Ezra for the Prisoner and the Skeleton.

Most notably, a pin (depicted here) confirms the name, although merchandise has often been known to be of questionable canonicity.

In Disney's line of Host a Ghost Spirit Jars, he is given the name Prof. Phineas Plump

During the limited interactive mystery game, Ghost Post, he is heavily implied to be the ghost yearning to hitchhike named Phineas.

In the SLG comics, his name was given as Dr. Phineas Q. Hackenbush.

In the mobile-phone-only video game Disney Crossy Roads, his name is given as Prof. Phineas Plump.

Retrieved from "https://hauntedmansion.fandom.com/wiki/Phineas?oldid=12967"
Community content is available under CC-BY-SA unless otherwise noted.