Born in 1795, Henry Ravenswood was initially a simple prospector in the old West, but his discovery of gold in Big Thunder Mountain in 1849 would make him a fortune. The town of Thunder Mesa sprang up soon after, and Ravenswood would establish financial dominance of the mining operations in the area. Ravenswood would build a stately manor on a hill overlooking the river and the boomtown he'd helped create with other founding fathers.

Local natives warned that the mountain was the resting place of the legendary Thunderbird, and that if the settlers kept mining, the spirits of the mountain would grow angry and cause misfortune. Ravenswood, ignoring the warnings of the legend, continued to work in the mines.

As the years passed, Henry would become increasingly possessive of his daughter, now a young woman. He deeply resented the string of suitors that came looking for Melanie's hand, as none of them were good enough for her in his eyes. As a result, Henry arranged for the deaths of four of her suitors: Barry Claude, an oil-field salesman who was mauled by a bear; Captain Rowan D. Falls, the captain of the Mark Twain Riverboat who was sent over a waterfall in a rowboat; saw-mill owner Sawyer Bottom, who was bifurcated with an industrial buzz-saw; and explosives manufacturer Ignatius "Iggy" Knight, who blew up with a large amount of dynamite. At some other unknown point of time, Henry cheated during a duel with another gentleman by turning around before the draw and firing at the man's back, killing him. Also he was believed to have an affair with the manor's chamber-maid Anna Jones.

Melanie's fifth and final suitor was a train engineer working in Thunder Mesa, and it was not long before they were making plans to wed. Ravenswood, for once, consented the union, but when he learned that Melanie's beau intended to take her away from Thunder Mesa, he became furious and vowed he would do everything he could to prevent it. However, before he could take action to stop the wedding, the great earthquake of 1860 devastated Thunder Mesa, and Ravenswood and his wife were killed. Some claimed it was the wrath of the Thunderbird that caused the tragedy while others said it was the result of a massive dynamite blast from the Mountain. Henry and Martha were then buried side-by-side in Boot-Hill Cemetery with the epitaph "Quarelled and Fought as Man and Wife.  Now silent together beyond this life".

Some time later, Mélanie and her lover had decided to marry within the Great Hall of Ravenswood Manor before leaving town. However, before the wedding commenced Mélanie's groom was lured away to the rafters of the Manor where he was attacked by a cloaked skeletal spirit and hung to death. After the wedding had to be cancelled, Mélanie refused to leave as she didn't believe that her beloved would ever leave her and after the guests left Mélanie was never again seen alive, having had perished within the halls of the manor.

In 1882, an outlaw named Milo "One-Eye" Jones robbed the Big Thunder Mining Company and tried to use Ravenswood Manor as a hideout. In 1884, the Thunder Mesa Town Council shut off access to Ravenswood Manor. The first group sent into the mansion left screaming and allegedly half-mad. The second group was composed of several intrepid explorers and adventurers who were never heard from again, having been presumably killed. The third group was composed of sceptics who claimed the mansion was merely filled with hallucinations, allowing the manor to be reopened.

Throughout the mansion's closure, several spirits left Phantom Manor and encountered citizens. When the manor was reopened, Henry attended the ceremony in the human form of an elderly man. At the ceremony, Henry opened the gates of the mansion and introduced himself as an affiliate of the Big Thunder Mining Company. Henry went on to invite several of the guests into Ravenswood Manor as new prey for himself.

The Phantom fills the role of the Ghost Host in the attraction, his voice guiding guests through most of the early parts of their tour. While working on Phantom Manor, it was decided that the attraction would be focused on two characters from the Haunted Mansion - the Bride and the Ghost Host. The latter would take the form of an evil Phantom who killed her fiancé and tormented her for all of eternity.

When developing the attraction that would become Phantom Manor, it was decided that it would be the home of the owner of the mines of Big Thunder Mountain. His original name was Arthur Ravenswood, named after Thurl Ravenscroft, one of the Singing Busts. He was given a brother name Henry. Henry was more boisterous than Arthur, a womanizer and a bully, and it put him at odds with his brother. He was the overprotective father of Melanie, who forbade her from leaving the mansion. As time went on, the story was simplified and Arthur and Henry were combined into one character.

When constructing a demo for Phantom Manor's soundtrack, Imagineers used Vincent Price's laughter at the end of Michael Jackson's "Thriller" as a placeholder for the Phantom. As time went on, Vincent Price became the Phantom, and they brought him in to read for the role. He tried to read the role in French, but couldn't get the pronunciation down. So, the Imagineers had him read the spiel in English.

Shortly after Phantom Manor opened, it was requested that a French narrator be used, instead. The spoken dialogue was re-recorded by French actor Gérard Chevalier, and only Price's laughter remained. An audio recreation of Phantom Manor with Price's narration was released on The Haunted Mansion: 30th Anniversary CD.

In 2018, it was announced that Vincent Price's narration would be returning to Phantom Manor, with the upcoming refurbishment. The original recordings were restored and spliced with a new French narration, similar to Madame Leota. Bernard Alane's new performance closely mimicked Price's speaking. It was also not until the 2019 anniversary updates to Phantom Manor that the Phantom was officially confirmed to be Henry Ravenswood, a connection that was somewhat ambiguous (but still heavily implied to the po in the original. However, this had been a key idea of the Imagineers' all the way to the ride's inception. There were however some fans who speculated that the spirit could have been an inhuman spirit (akin to a demon) fixated on Mélanie in a Phantom of the Opera fashion or perhaps an incarnation of the Thunderbird brought upon to further the Ravenswood Family's suffering.

During the attraction, guests encounter the Phantom many times. His disembodied voice greets the guests as they enter the foyer and delivers a speech about the manor, insisting that "beauty once lived in this house… and beauty lives here still", and prompting the mortals to take a tour of the Manor to see by themselves this alleged beauty. Unlike the Ghost Host, whose role the Phantom's voice fills in both the Foyer and the Stretching Room, the Phantom is not heard again during the rest of the tour, as he has left the guests on their own, attending to other ghostly matters throughout the manor instead.

He is first seen in the Stretching Room, standing among the rafters of the ceiling holding a noose. He seems to shadow the spirit of Melanie wherever she goes, appearing looming over her shoulder in the Endless Hallway, watching over the ghostly reenactment of Melanie's interrupted wedding and laughing, and in Mélanie's boudoir is reflected in her mirror as she weeps.

However, the Phantom's major entrance comes as riders enter the small graveyard behind the house. He stands with a shovel in hand and cackles at guests before their doom buggies tip backward into an open grave and descend into the catacombs.

The Phantom makes an appearance near the end of Phantom Canyon. He continues to laugh manically as he gestures to an open coffin (which might be his own, from which he just escaped, or an invitation for the guests to accept their demise and die).

Outside of the manor, sharp-eyed onlookers may spot the Phantom lurking behind one of the windows of the house. Henry's grave can be seen in Boot Hill Cemetery, next to his wife Martha. The epitaph reads: "Quarreled and fought as man and wife/Now silent together, beyond this life".

While not much changed between the original version of the Phantom and the updated attraction, there were some noteworthy alterations.

A portrait of Henry and his daughter, Melanie, can be seen in the foyer of the attraction. It depicts Henry grabbing her shoulders, while she wears a wedding dress. The manor is decrepit and the landscape is dark and grey. As the Phantom continues his monologue, the portrait changes to one of Henry and Melanie during happier times, with the manor's grounds becoming lush and green.

Two portraits of Henry can be seen in the changing portrait gallery before the loading zone. One depicts him with his arms crossed in the manor. As lighting flashes, a skull replaces his head. The second depicts him with another man in a duel. They are both holding rifles with their backs to each other. As lightning flashes, Henry is shooting the other man in the back.

At the Disneyland Railroad's station in Main Street there is a mural portraying several figures waiting for a train. On the mural is a depiction of Melanie Ravenswood with the silhouette of the Phantom behind her.

In the early years of the park, the Phantom was available for meet and greets outside of the attraction. He was removed in the early-2000s, possibly for being too scary.

The Phantom appeared in the Disney Sing Along tape Let's Go to Disneyland Paris during the "Grim Grinning Ghosts" segment. At the beginning of the song, he made the scary trees come to life and danced with them. At the beginning of the third verse, he stood on the manor's porch, alongside the Bride. At the end of the song, he stepped out of the manor with the bride, and spoke to the Disney Villains. The union was broken up when Donald Duck stepped out of the house, scaring everyone. He and the bride ran back inside, while the rest of the villains scattered.

The Phantom appeared at the end of the Frontierland segment of the stage show C'est Magique. He stepped out from behind a stage door and carried Melanie down the stage. At the end of the song, they exited on opposite sides of the stage, stretching towards each other.

The Phantom appeared in the parade Mickey's Halloween Celebration on the Illusion Manor float. He was on the porch of the float, alongside Melanie. He was given a redesign, with a new, more colorful and sparkly costume. On the parade route, he talked to Mickey Mouse about the celebration.

This Phantom has become the standard Phantom costume character in the Disney Parks, and has made sporadic meet and greet appearances at special events in Disneyland Paris. He was given the fan nickname "Glitter Phantom", due to his extravagant costume.

Henry appeared in a promotional video for Phantom Manor's reopening. He wrote a letter welcoming guests to the reopening of Phantom Manor, and dressed in his signature Victorian suit and hat. 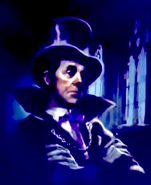 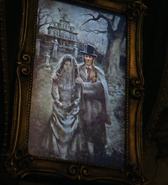