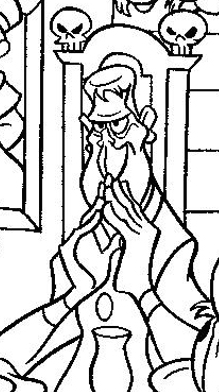 Mr Gool is a tall, muscula man, whose head resembles that of Frankenstein's Monster as played by Boris Karloff. Gool introduced himself to Mickey Mouse as the owner of the Haunted Mansion. He is not recognized as a ghost in the book, which suggest that he might be the current mortal owner of the house, but this is never clarified; when seeing the Stretching Room portraits, Minnie Mouse assumes that the Tightrope Walker was one of Mr Gool's ancestor, which implies he might have inherited it. Confusingly, Gool is also firmly stated to be the husband of Madame Leota, which is inconsistent with the "mortal" aspect of the character, and also by their different family names.

Retrieved from "https://hauntedmansion.fandom.com/wiki/Mr_Gool?oldid=13136"
Community content is available under CC-BY-SA unless otherwise noted.