Varies from Story to Story

Most Notable Professions are Steamboat driver and Sorcerer's Apprentice

Mickey Mouse is an anthropomorphic mouse cartoon character. Created by animator Walt Disney and Ub Iwerks, Mickey became famous for his first short, Steamboat WIllie. He is the "main" character of the Disney franchise.

In all versions of the Haunted Mansion, silhouettes of Mickey's head can be seen hidden throughout the attraction. These easter eggs are referred to as, "Hidden Mickeys" and are a staple of Disney Theme Parks.

Mickey is the protagonist of the 2010 video game Epic Mickey which featured an alternate realm's version of the Haunted Mansion known as Lonesome Manor. He does quests in the manor for the Lonesome Ghosts and Madame Leona. Horace Horsecollar asks him to go to the manor to find Constance Hatchaway's hatchet as proof that she killed her husbands.

Mickey is a main character of the short story Spooky Tenants. When Goofy comes to his home, tired from the ghosts disturbing him, he decides to help him out. They discover that they're the ghosts of the Harker family - Jonathan, Ebeneezer, and his wife - and moved into Goofy's house when they lost their home. Mickey offers them a new home - the Haunted Mansion at Disneyland.

Mickey is a main character of the illustrated coloring book The Haunted Mansion: Haunted Happenings. He runs Squeaky Cleaners alongside Minnie, Donald, Goofy, Daisy, and Pluto. He gets a call from Mr. Gool on Halloween to come clean the mansion. He and his friends go through it together, until they realize it's haunted. Then, they try to escape as fast as they can, leaving all of their supplies behind. When Mr. Gool calls out to them, Mickey tells him to clean his own house from now on.

Mickey is the main character in the animated series House of Mouse, where he runs and hosts the titular night club.

At the end of the episode, he tells Donald that the costume contest didn't happen because of the ghosts. The Hitchhikers phase in next to them, scaring Donald. Mickey laughs and tells Mike to end the show.

Mickey appeared on the Illusion Manor float in Mickey's Halloween Celebration at Disneyland Paris. The float was inspired by Phantom Manor, and he appeared alongside the Phantom and Melanie Ravenswood. He spoke with the Phantom about the celebration on the parade route, and danced with the Waltzing Dead during the show stop.

In 2019, Mickey began making meet n greet appearances outside of Phantom Manor's entrance. He is dressed in either a Phantom-inspired suit or his Lucky Nugget outfit. Fans have dubbed him "Phantom Mickey" and "Mickey Ravenswood".

In 2019, Mickey could be seen at Club 33 dressed in a Haunted Mansion-inspired costume to help celebrate the mansion's 50th Anniversary. Minnie Mouse wore a matching dress.

Mickey appeared in the Disney Sing Along tape Happy Haunting: Party at Disneyland, hosting a party at the Haunted Mansion at Disneyland.

Mickey was seen in productions alongside Haunted Mansion characters, though they never interacted such as parades like Mickey's Boo to You Halloween Parade.

In the Attic, made of the hats of Constance's Husbands 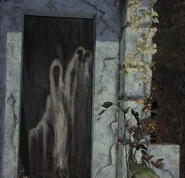 In the Graveyard
Add a photo to this gallery

Mickey and Goofy in Spooky Tenants

Mickey and the Lonesome Ghosts

Mickey, Donald, and the Hitchhiking Ghosts

Add a photo to this gallery
Retrieved from "https://hauntedmansion.fandom.com/wiki/Mickey_Mouse?oldid=14961"
Community content is available under CC-BY-SA unless otherwise noted.