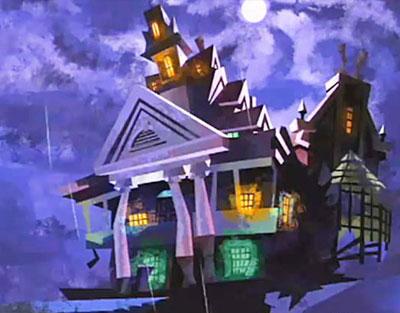 Lonesome Manor is a haunted mansion located in Bog Easy (in Wasteland).

Lonesome Manor was likely a haunted manor in its own right before it was forgotten by mortals and sent to Wasteland (which was created to house forgotten things and people).

Constance Hatchaway was once the Lady of Lonesome Manor (likely during the forty years between the first sketches of a Black Widow character by Marc Davis and her actual appearance in the attraction). The Wastelanders, such as detective Horace, quickly suspected Constance of having murdered all of her husbands, but could not prove a thing. However, when Constance left the Manor, she left her hatchet behind in the Attic, later to be found by Mickey Mouse, proving her guilt.

Probably around this time, the numerous Lonesome Ghosts (led by Ian, Gabriel and Screeching Sam) claimed the Manor and began to inhabit it. They were however thrown out of the Mansion by the Organ when it suddenly turned mad because of the Shadow Blot's corrupting influence and the Mad Doctor seizing the Attic as his laboratory and headquarters. While many residents of the Manor left during this chaos, Madame Leona, the Wasteland counterpart to Leota, remained behind in the Library.

Retrieved from "https://hauntedmansion.fandom.com/wiki/Lonesome_Manor?oldid=12383"
Community content is available under CC-BY-SA unless otherwise noted.