"Hurry back! Hurry back! Be sure to bring your death certificate, if you decide to join us. Make final arrangements now! We've been dying... to have you..."

Little Leota, also known as the Ghostess is one of the ghosts haunting the Haunted Mansion.

The Ghostess is very small being only around the size of a doll. She wears a white satin dress with a long, non transparent hood, often mistaken for a veil, of the same material. She has visible long blue hair and glowing pale blue skin. Contrary to popular belief, she is not holding a bouquet of dead flowers, but instead holding dried herbs. Nevertheless, to the untrained eye, she slightly has the appearance of a bride. Based on her actual description, it is possible that Little Leota is actually a wisp or fay of Celtic folklore.

The ghost's voice and face were both provided by imagineer Leota Toombs which has earned her the semi-official name of Little Leota. In part this is thanks to Leota more famously having lended her face to the character of Madame Leota.

Little Leota appears in the exit crypt in all versions of the Haunted Mansion where she stands atop the ledge of the crypt holding a bouquet of dead flowers as she invites the guests to, "Hurry Back" and to remember to bring their death certificates.

In Disneyland's Haunted Mansion she is found off to the side of the exit crypt as guests ride the up-ramp.

In these versions of the ride, the Ghostess is first alluded to in the Ghost Host's narration after the library where he says,"Well, if you should decide to join us, final arrangements may be made at the end of the tour. A charming ghost'ess will be on hand to take your application". This dialogue also hints that she might be affiliated with the Ghost Relations Department.

She appears when the guest's Doom Buggy passes through the crypt right after the Hitchhiking Ghosts scene. Here she stands on a stone ledge, overlooking the passage which the guests pass under within the mausoleum.

In the Ghost Gallery storyline the Ghostess was the daughter of Madame Leota and it is hinted that her father was Master Gracey (who in this story becomes the Ghost Host). She was said to have been a talented medium like her mother with a keen interest in death and a murderous sense of humour.

This Little Leota was engaged to a wealthy man named Jamie Padgett who she cheated on with a man named Nicholas Crown who helped her murder Jamie by sealing him alive in a coffin, she also lured the mansion's handyman, gardner, and liveryman to their deaths in the swamp after they rejected her advances, frightened her personal maid to death, and she liked to go down to the harbour so that she could spend time with pirates. She wound up dying in the river by the mansion and her corpse shrivelled to the size of a doll, explaining why her ghost appears so small.

The Ghostess made a live-appearance in this event which was themed around the wedding of Constance Hatchaway and George Hightower. She was shown as a woman with white or platinum-blonde hair, a pale face, a white dress, and dark eyeshadow.

While her animatronic figure is dressed to look like a bride while in merchandise her outfit is made to look like a white cloak instead. This is most likely to avoid confusion of the Mansion's more famous Bride characters. 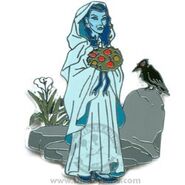 A pin of Little Leota and the Raven
Community content is available under CC-BY-SA unless otherwise noted.
Advertisement