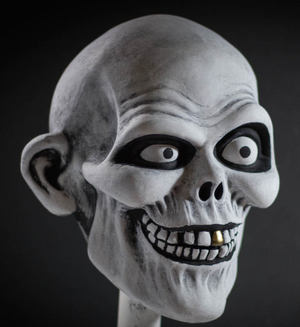 The Leering Head is a head-mold used several times in the Haunted Mansion attraction.

The Leering Head model is a greening skull-like face with prominent cheekbones, a mocking wide grin and a left eye slightly bigger than the right one, giving off the impression that the figure is trying to make eye contact with the guests.

The Leering Head is one of the most notable and widely-used head models in the attraction. It is used as:

Retrieved from "https://hauntedmansion.fandom.com/wiki/Leering_Head?oldid=17319"
Community content is available under CC-BY-SA unless otherwise noted.