A ravishing bride... a vanishing groom..."

Jake is a character who appeared in Disneyland Paris' Phantom Manor prior to its 2019 refurbishments. He was a foreman of the Big Thunder Mining Company and the ill-fated fiance of Melanie Ravenswood.

Jake was a mine foreman working in Big Thunder Mountain for the Big Thunder Mining Company. Jake was in love with the daughter of the company's owner, Mélanie Ravenswood and became a suitor of hers. Their relationship was kept a secret and they planned to elope, in spite of her controlling father's wishes. He vowed to stop their wedding, no matter the costs. But those wishes were put to an end, when he perished in the 1860 earthquake.

After the earthquake, Jake and Melanie were to marry inside Ravenswood Manor but before the wedding Jake was lured into a secret chamber in the rafters of the estate where he was violently murdered by the malevolent Phantom, having been hanged by a noose. His fiancee was left to roam the manor for the rest of her existence, waiting for him to return.

Jake appeared twice: once physically and once in the form of a portrait. Jake's first appearance was in the Stretching Room where he was shown in a portrait having a picnic with Melanie while playing the guitar, but as the portrait elongated revealed the approach of ants, a scorpion, a beetle, a tarantula, and a rattlesnake; Jake's second appearance was revealed when the ceiling vanished and displayed Jake's corpse being hanged by the Phantom.

Jake is mentioned by Madame Leota in the Séance Circle. As she gives her incantations, she invites the spirits to join in the nuptial doom, with a ravishing bride and a vanishing groom.

In the 2018/2019 refurbishment of Phantom Manor, all references to Jake seemed to be stripped away for a new backstory. The stretching portrait was replaced by new portraits of her new suitors, and his corpse in the cupola was removed. The only possible allusion to the character is a portrait in the foyer showing a noose on a tree alongside four heart carvings made to represent the four new suitors. This might be intended to be a representation of Jake's character but this is weak as it is non literal.

However, nothing presented in the new story contradicts Jake's existence and, if ignoring his existence, plot-holes arise such as why Mélanie would be dressed in her wedding gown. Madame Leota's incantations are kept the same, as well. Due to this it seems most likely that Jake still exists in the mythos and was Mélanie's fifth lover.

In the initial draft of the story created by Jeff Burke, Jake was the mine's foreman hired by Arthur Ravenswood. He was present when Henry Ravenswood was killed by falling timbers. When he quit working at the mines, he encouraged Melanie to leave Thunder Mesa with him. Those plans were put to an end, when Jake met his untimely demise at the hands of the Phantom.

A piece of concept art exists of the Grand Hall that suggests Jake had another appearance. On the far end of the balcony, there is a portrait of Melanie and Jake, holding hands and looking at each other. Another piece of concept art depicts the same scene, but Melanie is by herself in the portrait. This could have been a changing portrait - changing from Melanie with her fiance to her alone. In the final attraction, the portrait was substituted with one of the manor in its glory days.

In Mélanie's boudoir, several tear-stained letters can be seen on a table at least one of which is written to Mélanie by Jake. Jake's letter reads:

When translated into English, it reads:

It is now time to announce to your father your love for me. I can't stand any more to watch your beauty...(Unreadable)..who peer endlessly at your sweet and voluminous chest. It is now time to offer you to me. 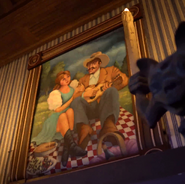