J. Nutterville was a resident of Thunder Mesa.

J. Nutterville was the undertaker of the town of Thunder Mesa during at least the 1880s.  He was also a cabinet-maker,an undertaker, a provider of funeral shrouds, and the man in charge of operating the Boot Hill Cemetery which was built adjacent to the notoriously haunted Ravenswood Manor.  Nutterville owned his own parlor in Thunder Mesa where he operated. In 1885, Nutterville was one of the townsfolk who attended the re-opening of Ravenswood Manor where he roamed the grounds taking coffin-measurements of those passing by, 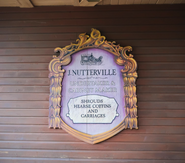 Add a photo to this gallery
Retrieved from "https://hauntedmansion.fandom.com/wiki/J._Nutterville?oldid=13076"
Community content is available under CC-BY-SA unless otherwise noted.