Henry Ravenswood (1795-1860) was a wealthy mortal man who used to own Ravenswood Manor before it became the dreaded Phantom Manor. As of the 2019 refurbishment of the attraction, it is shown that in death, his spirit became the malevolent Phantom whereas in the original attraction this was only heavily implied.

Henry Ravenswood was a businessman and founder the Big Thunder Mining Company. He was said to be an ambitious, disciplinarian man, who nevertheless loved (beyond reason) his daughter Mélanie. According to early backstory reports, he was notoriously unfaithful to his wife Martha, something which is never overtly stated but implied in his maid's epitaph.

Born in 1795, Henry Ravenswood was initially a simple prospector in the old West, but his discovery of gold in Big Thunder Mountain in 1849 would make him a fortune. The town of Thunder Mesa sprang up soon after, and Ravenswood would establish financial dominance of the mining operations in the area. Ravenswood would build a stately manor on a hill overlooking the river and the boomtown he'd helped create.

Local natives warned that the mountain was the resting place of the legendary Thunderbird, and that if the settlers kept mining, the spirits of the mountain would grow angry and cause misfortune. Ravenswood, ignoring the warnings of the legend, continued to work in the mines.

As the years passed, Henry would become increasingly possessive of his daughter, now a young woman. He deeply resented the string of suitors that came looking for Melanie's hand, as none of them were good enough for her in his eyes. As a result, Henry arranged for the deaths of four of her suitors: Barry Claude, an oil-field salesman who was mauled by a bear; Captain Rowan D. Falls, the captain of the Mark Twain Riverboat who was sent over a waterfall in a rowboat; saw-mill owner Sawyer Bottom, who was bifurcated with an industrial buzz-saw; and explosives manufacturer Ignatius "Iggy" Knight, who blew up with a large amount of dynamite. At some other unknown point of time, Henry cheated during a duel with another gentleman by turning around before the draw and firing at the man's back, killing him. Also he was believed to have an affair with the manor's chamber-maid Anna Jones.

Melanie's fifth and final suitor was a train engineer working in Thunder Mesa, and it was not long before they were making plans to wed. Ravenswood, for once, consented the union, but when he learned that Melanie's beau intended to take her away from Thunder Mesa, he became furious and vowed he would do everything he could to prevent it. However, before he could take action to stop the wedding, the great earthquake of 1860 devastated Thunder Mesa, and Ravenswood and his wife were killed. Some claimed it was the wrath of the Thunderbird that caused the tragedy while others said it was the result of a massive dynamite blast from the Mountain. Henry and Martha were then buried side-by-side in Boot-Hill Cemetery with the epitaph "Quarelled and Fought as Man and Wife.  Now silent together beyond this life",

Some time later, Mélanie and her lover had decided to marry within the Great Hall of Ravenswood Manor before leaving town. However, before the wedding commenced Mélanie's groom was lured away to the rafters of the Manor where he was attacked by a cloaked skeletal spirit and hung to death. After the wedding had to be cancelled, Mélanie refused to leave as she didn't believe that her beloved would ever leave her and after the guests left Mélanie was never again seen alive, having had perished within the halls of the manor. It would come be be known amongst the town-folk that the Mélanie's groom was murdered by a spectre they called the Phantom, who was the malevolent ghost of Henry Ravenswood.

When developing the attraction that would become Phantom Manor, it was decided that it would be the home of the owner of the mines of Big Thunder Mountain. His original name was Arthur Ravenswood, named after Thurl Ravenscroft, one of the Singing Busts. He was given a brother name Henry. Henry was more boisterous than Arthur, a womanizer and a bully, and it put him at odds with his brother. He was the overprotective father of Melanie, who forbade her from leaving the mansion. As time went on, the story was simplified and Arthur and Henry were combined into one character.

A portrait of Henry and his daughter, Melanie, can be seen in the foyer of the attraction. It depicts Henry grabbing her shoulders, while she wears a wedding dress. The manor is decrepit and the landscape is dark and grey. As the Phantom continues his monologue, the portrait changes to one of Henry and Melanie during happier times, with the manor's grounds becoming lush and green.

Two portraits of Henry can be seen in the changing portrait gallery before the loading zone. One depicts him with his arms crossed in the manor. As lighting flashes, a skull replaces his head. The second depicts him with another man in a duel. They are both holding rifles with their backs to each other. As lightning flashes, Henry is shooting the other man in the back.

Henry's grave can be seen in Boot Hill Cemetery, next to his wife Martha. The epitaph reads: "Quarreled and fought as man and wife/Now silent together, beyond this life".

He appears physically throughout the attraction as the Phantom.

Henry appeared in a promotional video for Phantom Manor's reopening. He wrote a letter welcoming guests to the reopening of Phantom Manor, and dressed in his signature Victorian suit and hat. 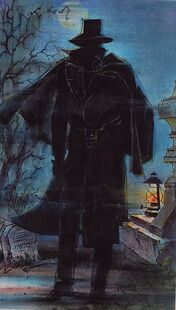 Concept art of Henry Ravenswood. This was the most commonly-reproduced image of Henry prior to the 2019 portrait's addition. 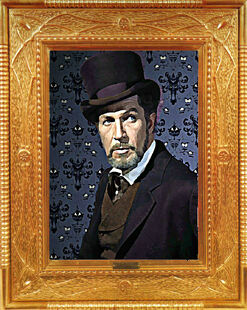 An originally fanmade portrait of Henry with the likeness of his voice actor Vincent Price, later used on the Daily Disneyland website's French variant. 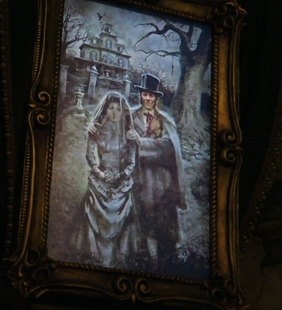 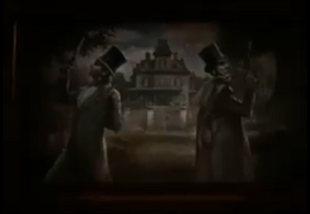 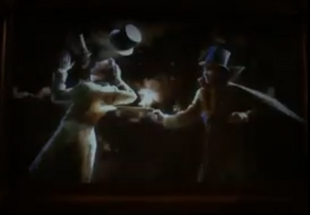 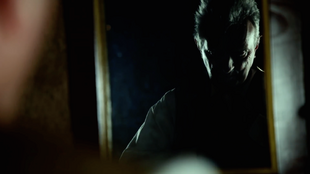 A glimpse of Henry Ravenswood's face in the mirror, as seen in the online teaser for the May the 3d, 2019 reopening of Phantom Manor. (Actor unknown.) 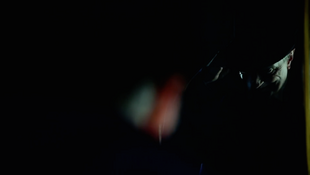 Henry grinning after putting on his top hat. 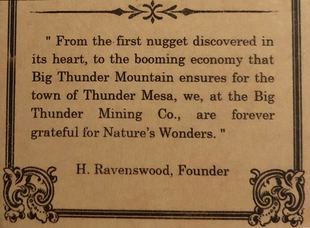 One of the few direct quotes from Henry Ravenswood himself, talking about Big Thunder Mountain's gold mine.
Add a photo to this gallery

Retrieved from "https://hauntedmansion.fandom.com/wiki/Henry_Ravenswood?oldid=14097"
Community content is available under CC-BY-SA unless otherwise noted.