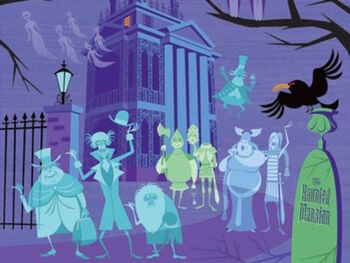 The Haunted Mansion is the main location in all media pertaining to the franchise. Although its appearance varies depending on the medium, its insides and history are globally identical in all versions: a haunted estate, populated by 999 assorted ghosts, spirits and haunts.

“Construction on the exterior of the Mansion was completed in 1963. In style, it is Antebellum Southern, themed to its location on the Rivers of America in the New Orleans area. Since its completion, Disneyland has been inviting ghosts from all over this world, and the next, to move in for "active retirement."

Latest population figures show that there are 999 residents at home in the Haunted Mansion, and they are always looking for #1,000 which might be any volunteer brave enough to enter. Ghost residents are a potpourri of supernatural, occult, psychic, and historical types, ranging from Egyptian and Roman, to Napoleonic and Dickens era. There is also an assortment of fluttering bats, talking ravens, screaming banshees, owls, cats, and baying hounds.

The Ghost Host is head man of the Mansion's skeleton crew. His mysterious voice accompanies guests throughout the adventure. The ride-through of the Mansion's labyrinth of cobwebbed-filled halls, pitch-black corridors, and deathly-cold rooms is made by means of two-passenger carriages of the continuously moving Omnimover WED-way Transportation System.”

The earliest canon attempts at providing a story for the Mansion are radio spots and TV shows from around Opening Day. The official story is that the Mansion was built by the Imagineers and the Ghost Relations Department in an effort to re-house various ghosts made homeless by the destruction of old haunted buildings. Walt Disney himself stated that the mansion was meant to house lost souls from all over the world, and a sign hung up in front of the mansion for many years prior to its opening promised "active retirement" for misplaced ghosts.

However, fans and Cast Members alike have long imagined that the house was actually once a real mansion before it was moved to its respective park, rather than an artificial building created especially for the park. Some of the earliest story drafts for the attraction, such as the Bloodmere Manor concept, inspired this idea, and it has been explored further with the fan-created Master Gracey mythos and canon Constance Hatchaway storyline. It can be safely stated that this aspect has probably been retconned into the true story of the Mansion.

As it stands right now, both of these backstories can correlate, and the setup is understood thus: the mansion had a history of living occupants, the exact number and ownership hidden in its grim history, before it became a retirement home for other ghosts, and over the years the mansion has become even more haunted. Now inhabited by 999 ghosts, it is difficult to say who was one of the original phantoms and who came to the mansion as a wayward soul from elsewhere; regardless, the mansion's residents eagerly await the arrival of mortal visitors, and invite them into their haunted home for tours.

The invisible, playful Ghost Host welcomes the guests in the Foyer as they arrive inside the house. He offers them a chance to tour through the Mansion, gradually revealing to them that the house is haunted by 999 ghosts (although there is “room for a thousand”, and the Host mockingly reminds them a few times during the tour that if they're not careful, they might become #1000). The mortals can however not yet see the ghosts, which greatly upsets the normally happy haunts. They attempt to reach into the mortal plane, without much success ("They all seem to have trouble coming through", says the Ghost Host; the best example might be the Coffin Occupant, who is stuck in his mortal remains with no way of escaping as an etheral body).

After they have witnessed many supernatural feats from the invisible spooks, the Host leads the guests to the Seance Room, where the ghost of a medium, Madame Leota, proceeds to recite an incantation, using the mortals' “sympathetic vibrations” to help the ghosts materialize. Once the spooks have materialized, they celebrate by throwing a party in the Ballroom, which the guests see from the staircase.

However, the mood suddenly changes as they are forced to pass through the Attic, where the ghosts of a Bride and her suitor(s) scare them straight. The atmosphere lightens once again as they exit the haunted house and end up in an old graveyard behind the Mansion. This is where most of the ghosts (some from inside the house, some from all over the world having just arrived, and some who seem to have rose from the graves themselves) have assembled. Partying and frolicking, they sing a song about themselves to the mortals, Grim Grinning Ghosts.

The guests are finally free to escape the house, having discovered that its inhabitants are after all not all that threatening. However, they do not yet know that a trio of playful haunts enjoy their company so much, they are going to follow them home…