The Bride (possibly his bride)

Randall Pace(SLG Comics)
Gauzey Bear (Muppets Haunted Mansion)
The Hatbox Ghost is a particularly infamous and iconic spectre among the 999 ghosts of the Haunted Mansion. Haunting the attic alongside the Bride (later Constance), he is remarkable mainly for his legacy of being the "lost ghost" of the attraction, originally appearing briefly when the mansion opened 1969 and then vanishing without a trace. On May 9th, 2015, however, the character was reintroduced.

Described as "a cloaked figure with an evil, grinning face" in The Story and Song from the Haunted Mansion, the Hatbox Ghost stands by with an old, kobby walking stick in his right hand and his namesake hatbox in his left. As riders look on, his head vanishes from his shoulders and reappears inside the hatbox, his top hat floating above the space where his head should be, only to have the head fade back into its original position moments later.

He has a similar face mold as the Skeleton hitchhiking ghost, Ezra. On the original figure, this happened to be an exact sculpt. Certain parts of his current animatronic have been coloured in such a way that it appears as if he is semi transparent. Some identify his cane as being a shillelagh.

In 1969, the Hatbox Ghost was briefly in a corner of the attic opposite the Bride where he was implied to have been a suitor to her, his head supposedly fading and returning with each beat of the Bride's glowing, thudding heart.

Today, the Hatbox Ghost stands on the balcony alongside seven hatboxes as guests exit the attic before they descend to the graveyard. His head vanishes with a sinister chuckle or an occasional hiss and appears again in the hatbox, blinking and moving its eyes. An uncredited Corey Burton provided the chuckles.

While not appearing within Magic Kingdom's Haunted Mansion, his presence is not completely absent. The ghost's face can be seen within several of the "Family Portraits" in the Corridor of Doors. The most evident of these is of a black & white photograph of the original Hatbox Ghost figure though there are two other photos of the same head-mould, showing the Hatbox Ghost in different hats. One of these has him wearing a bowler-hat and another having him wear a crown with the latter photo being nicknamed, "King Leer" as an allusion to the Shakespeare play King Lear and his leering head mould.

Also, in 2019 a Disney Photo-Pass addition was put in the attraction which took photos of guests in the ride during Walt Disney World's Portrait Hall sequence; when observed, these photos show the Hatbox Ghost looming overtop of the guest's Doom Buggies.

Though the Hatbox Ghost was briefly in the attraction when it first opened, the intended effect of the vanishing head did not work out as planned. Rumor had speculated that the old parts for the Hatbox Ghost were used for the Sam the Eagle animatronic at the now defunct ride America Sings. This was later disproved when a manual for The Haunted Mansion was auctioned off showing that the HBG was too simple to have any moving parts to end up in the Sam the Eagle figures. Some speculate that he was removed because he was "too scary for a family attraction."

Early promotional material for the Haunted Mansion likewise heavily featured the character and, coupled with the fact that most never even saw him or the intended effect, he was not easily forgotten. The mystery of the character would persist for nearly 45 years, with all sorts of rumors and speculation floating around.

This legacy has been reflected by both the company and the fans. The Hatbox Ghost continues to appear on merchandise, memorabilia and other Mansion-related items throughout the years, as well as making several cameos in various Disney media. In 2010, it was announced at San Diego Comic Con that Guillermo Del Toro's planned Haunted Mansion film would prominently feature the Hatbox Ghost. At the D23 Expo in 2013, a large animatronic figure was present at the show that was dressed to resemble the Hatbox Ghost.

In early January of 2015, following the take down of the seasonal Haunted Mansion Holiday overlay, a strange wall with a holographic window depicting one of the bat stanchions appeared on the balcony in the attraction. Many assumed this masked an upcoming addition to the attraction, and most surmised that it would be the Hatbox Ghost. Disney teased this by putting the Hatbox Ghost on much of their merchandise for the Haunted Mansion's 45th anniversary, and finally confirmed in late April that the Hatbox Ghost was indeed coming back to the attraction. On May 9th, following a week-long closure, the Mansion reopened with an updated Hatbox Ghost figure in the spot where the "mystery wall" had been, using a combination of sophisticated video projection and old-fashioned stage magic to create the illusion of the ghost's vanishing head.

The Hatbox Ghost makes a cameo appearance in an episode of House of Mouse when he's about to turn at Pete.

The Hatbox Ghost is portrayed by Fozzie Bear, using the name Gauzey the Hatbox Bear, with his head disappearing and reappearing being a part of his comedy act.

Tales from the Haunted Mansion

The Hatbox Ghost makes a brief cameo in Volume II's story "Uncle Rory's Late Show", welcoming Uncle Rory and Diana Durwin to the Mansion and placing the severed head of a bank manager that the undead Rory killed in his posthumous revenge spree into a hatbox.

In the Mystery of the Manse storyline, the Hatbox Ghost is the spirit of Randall Pace, a gunrunner decapitated by William Gracey during a mutiny. He is one of the spirits summoned by Madame Leota to torment Emily de Claire on the day of her wedding to Gracey, and seems to lead the ghosts of Gracey's murdered crew in frightening her to death. The Hatbox Ghost makes several minor appearances throughout the comic as well.

The Hatbox Ghost first appears in a cameo in The Haunted Mansion #2 alongside the Captain, Madame Leota and Constance as the nature of the mansion's ghosts and their powers is explained by Pickwick. It is revealed that these four ghosts are among the few that actually died on the grounds of the mansion, thus leading to them having more supernatural power.

In the following issue, he appears to help Danny escape from the Captain in the Grand Hall. It is revealed that he has only recently returned to the Mansion after a long time traveling to different haunted places around the world magically connected together by the Endless Staircase and Ghostly Materials Gallery, a vast labyrinth that only he has figured out how to properly use. Though insisting he's staying out of the fight, he urges Danny to continue on his adventure to undo the Captain's curse on the Mansion, free the Haunted Mansion's magic, and allow all the ghosts the freedom to travel. The end of the story reveals the Hatbox Ghost as the new keeper of the Captain's disembodied head, kept in one of his hatboxes, away from his ghostly body so he cannot reform and return to his evil ways.

Compared to the rest of the four, the Hatbox Ghost has a more relaxed personality, believing that the dead should learn to celebrate life in their afterlife, noting that it'd be impossible for Constance or the Captain to move on because of their respective unbridled rage and insatiable greed.

Strangely, he does not perform or refer to his "head-in-the-hatbox" trick even once in the Disney Kingdoms comics. 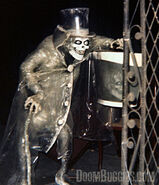 Mock-up of the original Hatbox Ghost

2015 Version of the Hatbox Ghost

Hattie from the Haunted Holidays event

Hatbbox Ghost as he appears in Haunted Mansion Holiday 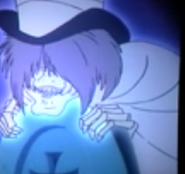 The Hatbox Ghost is about to scare Pete away