Joe Rohde
Harrison Hightower III is a ghost who is associated with Mystic Manor and the Haunted Mansion and who appears in Tokyo DisneySea's Tower of Terror attraction.

Harrison Hightower III was born in New York in 1835. Hightower inherited a large fortune from his parents and used it to expand the family mansion into a lavish hotel, the Hotel Hightower, while also using it to showcase his personal collection of artifacts and treasures from across the world.

Hightower was noted for his large personality and even larger ego, feeling that any treasure he sought should belong to him. Rumour persists that Hightower was particularly ruthless in his acquisition of relics and art objects, with some going so far as to say he outright stole from other collectors, museums and sacred sites.

At some point in his life, Hightower and a group of explorers were wandering around the jungle when one day they stumbled upon a 5,000 year old site, one with idols, a large temple and two altars, one of fire, one of water. Harrison attempted to take one of the head shrines but caused the gods to wreak havoc on the temple.

In the instance which ultimately doomed him, Hightower stole the cursed idol Shiriki Utundu from the Mtundo tribe of the Congo. On December 31st, 1899, Hightower threw a New Years Eve party at Hotel Hightower celebrating his return from the Congo, where at midnight he mocked the idol by using it to extinguish his cigar. The angered Shiriki Utundu used its powers to summon a blast of green energy which spirited away Hightower.

Ever since that night, Hotel Hightower has been abandoned, rumored to be haunted by Hightower's ghost and cursed by Shiriki Utundu. The hotel was a even scheduled for demolition but was saved by the New York Preservation Society in 1912 which turned it into a tourist attraction.

"The curse of Shiriki Utundu is real. You must not go further, or your fate will be the same as mine!"

In the Tower of Terror at DisneySea, Hightower's ghost serves as the initial host of the mortal guests when the enter the elevator and he can later be seen as a ghost in the penthouse recreating his ultimate fate with Shiriki Utundu.

He is first seen in the pre-show, as a stained glass portrait. One of the hosts turns on a gramophone, playing his last press conference. He talked to the reporters about his latest find, Shiriki Utundu and how he got it. A reporter asked if the idol was cursed, which Hightower laughed at.

The light in the room goes out, and the stained glass portrait is transformed. Hightower now has a worried expression on his face and he is holding Shiriki Utundu. He warns the guests that the curse is real. They must leave or they'll suffer the same fate that he did. Shiriki Utundu's eyes glow, and the scene changes. Hightower is in the elevator, and it climbs to the top floor. He continues to warn guests, until the elevator crashes down to the ground floor. He gives one final warning, saying that it isn't too late, before Shiriki Utundu disappears from the room.

When guests board the elevator, Hightower is disappointed that they did not follow his advice, calling them fools. But he was the biggest fool of all, and acknowledges that his lust for treasures caused his downfall. The elevator opens, showing a scene of Hightower with Shiriki Utundu. He mocks the idol and, in retaliation, is thrown down the elevator shaft and into the next dimension. He is cursed to relive this moment for all eternity.

After the drop sequence, he warns the guests to never return.

Tower of Terror: The Mystery

Hightower is a main character in the promotional film, Tower of Terror: The Mystery. The film outlines the attraction's backstory and the hotel's history from the point of view of Manfred Strang, a reporter for the New York-Globe Telegraph. Hightower can be seen in two scenes - the press conference, based on a scene from the attraction, and the New Years Eve party, the last moments of his life. Despite being warned to respect Shriki Utundu by his manservant, Smelding, he mocked the curse. He said "Here's what I think of it!", and extinguishes his cigar on the idol's head. The elevator crashed, and when Smelding and Manfred check the opened doors, Hightower is gone. Only Shiriki Utundu remains.

Hightower was retroactively incorporated into the backstory of this attraction in the Lost River Delta. The story behind this roller-coaster revolves around an ancient site which was vandalized by colonial explorers, resulting in the spirits behind the temple being thrown into chaos. In the tower of terror, there is artwork explicitly showing Hightower as being the perpetrator of this event.

In Mystic Manor, Hightower can be seen holding Shiriki Utundu in a portrait from 1899 of the Society of Explorers and Adventurers alongside Lord Henry Mystic and several other S.E.A. members such as Captain Mary Oceaneer, Professor R. Blauerhimmel and Dr. J.L. Baterista.

There is a crate from, "Hightower Industries" in the queue for this attraction. The character Skipper Missy also mentions tours of the Hotel Hightower over the Global Broadcasting Service.

At Skipper Canteen in the Magic Kingdom, Hightower's S.E.A. fez is sitting on display. He also has written several books in the library, including MINE, Treasures of the Animal Kingdom, and Expedition Everest: Search for the Yeti. The menus reference him in the description for Shiriki Noodle Suip, claiming that he served it at the New Year's Eve party where he disappeared.

There is a crate from, "Hightower Industries" in the queue for this attraction. The character Skipper Missy also mentions tours of the Hotel Hightower over the Global Broadcasting Service.

Hightower is referenced at the Tropical Hideaway restaurant at Disneyland's Adventureland. An ore from his 1872 expedition on the Yangtze River hangs on the wall, alongside other members such as Lord Henry Mystic, Captain Mary Oceaneer, and Barnabas T. Bullion.

Newspaper clippings of Hightower are on display at the Oceaneer Labs on the Disney Wonder, owned by Captain Oceaneer. The S.E.A. portrait from Mystic Manor is here, as well. 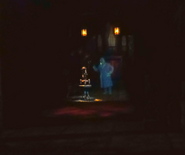 The Ghost of Harrison Hightower III

Harrison and Shiriki at a SEA meeting

Harrison and his Hotel