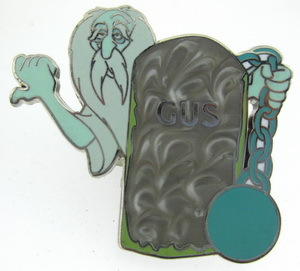 Gus is a minor Haunted Mansion haunt who might actually be the real name of the Prisoner.

The name of Gus for the Prisoner Hitchhiking Ghost was coined by Cast Members along with those of Ezra for the Skeleton and Phineas for the Traveler.

In the SLG comics, his name was given as Gus. His backstory is given in the story "The Big Nap". He was a sleepy shepherd that became frustrated with the noise of his sheep. After throwing a fit and escaping an angry ram, he tumbled into a wedding and knocked over the wealthy groom and was arrested, gaining his ball and chain. Trying to rest in prison, he was interrupted by the sounds of cannon-fire as the prison fortress came under assault by a crew of pirates. He was able to escape and use a cannon to launch himself on a pirate dinghy. Rowing towards a desert island however, his ball ended up falling overboard, causing him to drown. His spirit soon found its way to the Mansion where he hoped he could rest in peace, but the constant noise of their celebrations lead him to take up hitchhiking for quieter territory.

In 2011 at Walt Disney World's Mansion, an epitaphless tombstone with the name Gus debuted on the hillside adjacent to the queue. Especially considering that "Ezra" and "Phineas" tombstones were also added at the same time, it is most likely meant to be referring to the fan nickname.

A merchandising pin (pictured here) was also released, featuring the Prisoner next to the Gus tombstone.

In Disney's line of Host a Ghost Spirit Jars, the prisoner is featured as Gus.

In the limited interactive mystery game, Ghost Post, the southern hitchhiker named Gus is heavily implied to be the prisoner.

In the mobile-phone-only video game, the name of Gus is officially used for the Prisoner.

Retrieved from "https://hauntedmansion.fandom.com/wiki/Gus?oldid=12972"
Community content is available under CC-BY-SA unless otherwise noted.