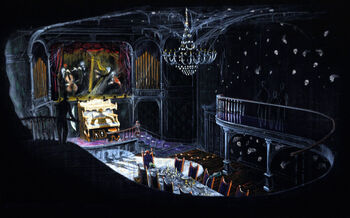 "The happy haunts have received your sympathetic vibrations, and are beginning to materialize. They're assembling for a swinging wake... and they'll be expecting me. I'll see you all a little later."

The Grand Hall, also referred to as the Ballroom, is one of the major rooms of the Haunted Mansion and Phantom Manor.

In all versions of the attraction, guests enter the Grand Hall from the Séance Circle and travel along a balcony overlooking the hall. A major party is underway as a multitude of transparent spirits engage in all sorts of revelry. A long dining table covered with decayed floral arrangements and dusty silverware plays host to a birthday feast, and whenever the orange-haired birthday ghost blows out the candles on a birthday cake at the head of the table, the other ghosts seated there vanish, only to reappear when the candles light again; nearby, an old woman disappears and reappears in a rocking chair. Several haunts drift into the hall from a hearse parked in a doorway, while cloaked wraith-like phantoms fly in through the broken windows from a stormy night outside.

While a number of ghosts - including the notorious Pickwick - gadabout on the chandeliers above the room, a pair of duelists emerge from their respective paintings on the far wall and take shots at each other, forever reenacting their age-old feud. The open floor whirls with waltzing couples as a ghastly organist plays Grim Grinning Ghosts on a pipe organ, where tiny spirits emerge from the pipes.

Upon reaching the end of the balcony, the doom buggies pass into the attic.

The scene, though much the same as its Haunted Mansion counterparts, has a few minor differences. The ballroom ghosts seem to have gathered for a wedding party, and a rotting wedding cake sits on the dining table, topped with the figure of a bride - the conspicuous space for a groom figure is empty. Melanie Ravenswood stands on a stairway across the hall, while the Phantom looms nearby and laughs. The other ghosts in the hall slowly fade in and out of view, leaving Melanie and the Phantom alone.

During the Holiday overlay at Disneyland and Tokyo Disneyland's Mansions, the hall gets decked out with macabre Yuletide cheer. A huge gingerbread house always dominates the dining table - guests actually smell gingerbread in the air as they pass - while a titanic, dead Christmas tree covered in glowing ornaments takes up the dancing floor, though the waltzing ghosts continue to spin through the pile of presents underneath. Beyond, on the balcony, guests can see an open doorway into a previously-unseen library, where books rotate slowly through the air.

A grand ballroom is frequently visited over the course of the film, first when the Evers family arrive at the house and meet Edward Gracey for dinner. It's also the setting for the climax, involving a botched wedding ceremony and a huge, fiery dragon that emerges from the fireplace. Direct references to the ride are the presence of a huge dinner table where the Evers eat and dancing ghosts in the same place.

The ballroom itself appears as a level in the game which can be visited after completing the dining room, which is a separate level. In this level, the organ sends strong winds to prevent the player character Zeke Holloway from reaching the light switch, which is only behind it but Zeke manages to breach this by using spider webs shot by giant spiders. This is also the first level the player character fights the main antagonist, Atticus Thorn. In both levels, the characters from the ride appear.

In the comics, the Grand Hall has been cursed by the Captain to keep the ghosts locked in a state of endless celebration, making them gradually lose their memories and never want to leave. This hypnotic effect can only be broken when one crosses the threshold of the hall. Danny Crowe nearly falls prey to the hall's effects, though is inadvertently saved by the Captain's own doing and eventually rescued by the Hatbox Ghost.

The Organist
Add a photo to this gallery

Retrieved from "https://hauntedmansion.fandom.com/wiki/Grand_Hall?oldid=14007"
Community content is available under CC-BY-SA unless otherwise noted.