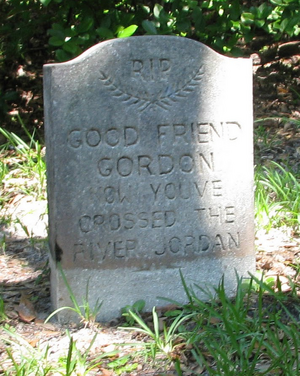 Gordon is one of the minor ghosts haunting the Haunted Mansion.

Little is known about Gordon. A tombstone bearing this name can be seen in the Haunted Mansion's family plot. Combining that fact with the epitaph, it can be guessed that Gordon was not part of the family to which the family plot belonged (the family that used to own the Mansion before it became haunted, likely the Graceys), but was a close enough friend to be buried with the Graceys all the same.

In the scrapped screenplay for a Haunted Mansion movie written in the 90's by Jim Hill and Sheila Greenberg , Gordon was to be shown as Gracey Mansion's former liveryman. He was a helpful ghost who'd guide the child heroes through the Mansion.