The Hanging Man
The Host

I am your host...your 'ghost host.' Kindly step all the way in, please, and make room for everyone. There's no turning back now..."
―The Ghost Host

The Ghost Host, whose visual depiction is sometimes referred to by fans as the Hatchet Man or the Hanged Man, is one of the most prominent ghosts haunting the Haunted Mansion.

Officially described as "the head man of the Mansion's skeleton crew" or "the majordomo of the Mansion's skeletal staff," the Ghost Host serves as an invisible tour guide to mortal visitors of the Haunted Mansion. He speaks in a deep, resonant voice with a transatlantic dialect (provided by voice actor Paul Frees). Although his character's history is mostly shrouded in mystery it is known that he died by being hanged in the cupola of the Mansion, likely through suicide.

In the portraits shown of the Ghost Host, he is commonly depicted as a tall, caucasian, skinny man with unkept white/pale blonde hair,a crooked nose, and his right eye is shown to be wide and yellow with either a green or red iris.

The image of a hanged suicide as an element of The Haunted Mansion originates from the earliest concepts proposed by Imagineer Ken Anderson in the late 1950s. His first attempts at a story revolved around Captain Gore, a secret pirate who murdered his young wife Priscilla (after she discovered the truth about him). In some versions (albeit not all of them), Captain Gore had been haunted by Priscilla and ended up hanging himself. The tour guide in this version wasn't a ghost, but a live butler character named Beauregard.

In a later concept by Anderson, the butler was joined in tour guide duties by a friendly spook known as the Lonesome Ghost. In this version, the hanged body was of a guest to a wedding gone awry. "The best man seems to be all tied up," the Lonesome Ghost would joke. After Ken Anderson left the project, many of his ideas carried over to the other Imagineers who were put in charge of its development.

One version of the Host, sketched by Marc Davis, had him introduce the guests to a gallery of paintings, among which was one where only the silhouette of a stout sitting man could be seen. The Host would explain that this portrait housed "the most dangerous ghost in the Mansion", and that he had now escaped. Despite this warning, the guests would encounter the spook in question, only for him to reveal him and the Ghost Host to be one and the same; moreover, he would explain that he was the murderer of the Bride and her Groom.

One concept by Dick Irvine told the story of Mr. Meaker, a man who murdered his several wives for their money, via a lowering bed canopy. After he accidentally killed his beloved pet cat in the contraption, he hanged himself.

Early on in the project's development, Paul Frees was brought in to record various demos for a "Ghost Guide" spoken in Bela Lugosi and Peter Lorre impressions, although these Ghost Guides might not have yet been intended to be the Hanged Man at that point. Frees would go on to become the voice of the Ghost Host for the final attraction.

One proposed concept for the Ghost Host was that he and the Raven would turn out to be the same character. This idea eventually changed to the Raven retaining a speaking role, but as a foil to the Ghost Host. In the final attraction, the Raven does not speak, and there is no overt relation between him and the Ghost Host.

And yet another concept had the Ghost Host first talk to the guests in the Foyer through a bust, presumably representing him, with the date “1835” written on it. As the Host talked, the bust would morph into a devilish figure.

The Ghost Host's disembodied voice narrates the entire first half of the attraction, from the Foyer to the immediate aftermath of Madame Leota's séance. At this point, the Ghost Host informs the guests that, as the happy haunts are beginning to materialize and readying for a big party, they'll probably be expecting him, and that he must now temporarily leave them, although he says that he'll “see them all… a little later”. He is nowhere to be heard until the guests begin to exit the Graveyard Jamboree. As they come across the Hitchhiking Ghosts, he warns the mortals that the three spooks are set on “haunting them until they return”, and that they must beware.  The only physical manifestation of the Ghost Host comes in the Stretching Room, where after offering his way out, a flash of lightning reveals his skeletal remains hanging from the rafters of the previously-unseen cupola, dangling from a taut rope. 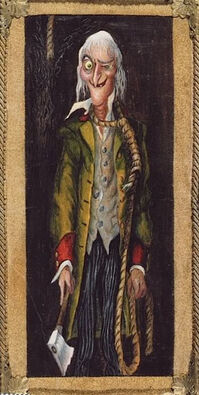 In Disneyland's Mansion, a full-length portrait of the Ghost Host (derived from concept art by Imagineer Marc Davis) can be found in the Corridor of Doors, depicting a tall, thin, pale, ghoulish-looking man holding a hatchet, with a noose around his neck. He has long, stringy white hair and appears to be giving the "evil eye". The portrait has been repainted many times over t

he years, adding and subtracting details such as scarring around his eye and blood on the hatchet blade, or his skin color (which can either be of an uneathly blue, or of approximately natural tone). In 2007, a similar portrait was added to the Corridor of Doors in the Walt Disney World Mansion, in which the shadow the Ghost Host casts behind him raises the hatchet menacingly.

According to Imagineer Jason Surrell, in his book The Haunted Mansion: From the Magic Kingdom to the Movies, the invisible pianist who casts a shadow in the Music Room (at Walt Disney World and Tokyo Disneyland) is none other than the Ghost Host.

The Ghost Host's voice is provided by Corey Burton during the opening credits, giving his famous (although only in the whole movie) line “Welcome, foolish mortals”. Chief makeup artist Rick Baker portrays the Marc Davis-designed Hatchet Man depiction of the Ghost Host in a very brief scene of the 2003 live-action film. The character, unlike in the ride portrait, does not wear noose or hold his trademark hatchet, and is seen hiding behind a tombstone (reminiscent of the ride's Pop-up Ghosts) in the Graveyard scene as the Evers ride the ghost carriage past him. The Ghost Host character, separate from the Hatchet Man, also served as inspiration for two distinct characters in the film. Ramsley greets the “guests” and is the one to threaten to kill them. Master Edward Gracey, meanwhile, doesn't possess the Host's personality traits, but is the man hanging in the Stretching Room as well as the former Lord and Master of the Mansion, tying his character to the Ghost Host. Towards the end of the movie, Master Gracey briefly disappears and only his voice is heard, in an obvious nod to the Ghost Host.At one point in the film, the character Ezra (Wallace Shawn) says, "There's always my way," one of the Ghost Host's lines from the ride.

In a teaser shown at Comic-Con 2010 for the upcoming Guillermo del Toro film, a brief narration was provided by Ian McShane, quoting a portion of the Ghost Host Stretching Room dialogue.

The Ghost Host frequently appears as the narrator of numerous stories in the non-canon SLG comic series. He most notably narrates Mystery of the Manse, where he reveals himself to actually be William Gracey, former sea captain who hung himself over the loss of his Bride, Emily de Claire (although the Ghost Host might be something of an irreliable narrator, as at least some of the facts he mentions in the story are contradicted in later issues).

The Ghost Host oddly does not appear in the comic, in either "Hatchet Man" or disembodied voice form. However, some of his most famous dialogue is performed by other characters in Issue One: Danny Crowe, speaking to himself, and the Black Prince, speaking to Danny. In Issue 4, his skeleton hanging from the rafters of the cupola is encountered by Danny, but it is not a ghost, merely an inanimate skeleton, which Danny accidentally shatters to pieces.

Screenshots for the cancelled 2003 video game for Gameboy Advance featured the Hitchhiking Ghosts saying, "Welcome, foolish mortal, to the Haunted Mansion. We are your ghost host; Ezra, Gus, and Phineas."

In the video game, the Ghost Host's portrait adorns the walls of different rooms throughout the mansion. The game's villain is the evil necromancer Atticus Thorn (voiced by Corey Burton), who at times quotes Ghost Host dialogue (e.g. at one point he calls the protagonist "foolish mortal"). Thorn is also capable of disappearing, with his ominous voice the only sign of his presence.

In Kinect Disneyland Adventures, a video game for Xbox 360, the Ghost Host guides the player through the Haunted Mansion at Disneyland.

During the Haunted Holidays promotion on Disney.com in 2009, the Hatbox Ghost was referred to as the Ghost Host and voiced by Corey Burton, again providing a tribute to Paul Frees' Ghost Host voice.

Finding an identity to the Ghost Host has always been a problem among the Haunted Mansion's fandom.

Ever since the "Master Gracey" tombstone has been noticed in the graveyard, there have been fans speculating that Master Gracey is also the "Master of the House" (another erroneous interpretation of the Aging Man character from the changing portrait), due to a misunderstanding of the name ("master", in XIXth century Louisiana, referred to a young man not quite a teenager anymore but not yet an "adult", not to the actual "master" of the place).

Consequently, the two headcanons merged together, and it became a common idea that the decaying man is the master of the house, named Gracey, who gives the mortals a tour under the self-given title of "ghost host." This idea became so popular that it made its way into some official Disney merchandise sold at the parks, highly upsetting actual Imagineers who didn't agree with the idea. The 2003 film included the idea that the Master of the House was named Gracey and was the decaying man of the portrait, creating the film version of Master Gracey.

However, a fact often disregarded is that the Ghost Host is also supposed to be ghost of the Hanging Man, as evidenced by the line "There's always… my way" that plays before the hanging corpse is revealed to the audience. The Hanging Man is also made to be the Hatchet Man, and the canonical path would be to consider that Ghost Host = Hatchet Man = Hanging Man. Fans being fans, that didn't stop many people from remarking that "= Master Gracey" could easily be added to the equation, providing that the idea that he was the decaying man was wrong.

Finally, and though it's slightly less popular, there is still an "ultimate" version of the theory, in which the Hatchet Man is an older Decaying Man, that the Decaying Hatchet Man is named Master Gracey, and that he Hanged himself. This theory is as complete as can be so far, but is somewhat informed by the fact that the Decaying Man's "old" phase in his changing portrait only barely resembles the Hatchet Man. That being said, it is possible that the Hatchet Man portrait was originally a formal portrait and after the house became haunted, ghosts possessed the painting, adding a noose and hatchet, changing his facial features, etc., in the same way as it is suspected by many fans that the "Family Portraits" in the Corridor of Doors would have come to be.

Separately from the "Master Gracey-Master of the House-Hanging Man-Hatchet Man" mythos, there have been a few other attempts at creating a backstory for the ghost host, sometimes identifying him with other characters.

Retrieved from "https://hauntedmansion.fandom.com/wiki/Ghost_Host?oldid=15343"
Community content is available under CC-BY-SA unless otherwise noted.