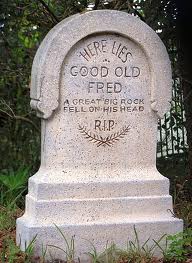 Fred is one of the ghosts haunting the Haunted Mansion.

Fred was a man who died when a "great big rock fell on his head." His tombstone is located in the family plot of the Mansion in Liberty Square, suggesting he was related to the family who owned the Mansion in days of yore (probably the Graceys).

Retrieved from "https://hauntedmansion.fandom.com/wiki/Fred?oldid=11257"
Community content is available under CC-BY-SA unless otherwise noted.