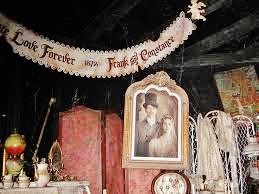 Frank Banks is one of the ghosts in the Haunted Mansion.

Frank Banks was a respected Eastern banker and pillar of the community in his hometown of Bulfors Isle, California. In 1872, he married the Constance Hatchaway, a beautiful widow who had inherited the wealth of her late-husband Ambrose Harper. To Frank's surprise, Constance beheaded him on their wedding night and inherited all this wealth, moving on to a next husband.

When Constance's ghost moved to the Haunted Mansion, so did the spirits of her five unfortunate husbands. They haunt her wedding pictures, making their head disappear from their shoulders to denounce Constance's crime to the guests.

Retrieved from "https://hauntedmansion.fandom.com/wiki/Frank_Banks?oldid=12889"
Community content is available under CC-BY-SA unless otherwise noted.