The Family Portraits are (possibly haunted) photographs that can be seen in the Haunted Mansion.

In the Corridor of Doors, several framed photographs can be seen. They represent hideous corpse-like faces, some grinning, some screaming in glee or agony. At Walt Disney World, the portraits have been there since the 2007 renovation, but they have never been present at Tokyo Disneyland.

In Tokyo's mansion, these portraits replaced with a painting a man in a top hat whose face appears to grow and become three-dimensional.

Those portraits have come to be known as the "Family Portraits". Three main ways of interpreting them have been formulated.

The first posits that those really are regular pictures of the denizens of the house, the Happy Haunts themselves. This is consistent with the fact that some of the portraits are recognizable ghosts seen elswhere in the Mansion, most notably the Hatbox Ghost (in the upper left corner of this page's illustration) and several Pop-Up Ghosts.

Another way of taking those portraits disregards the fact that the heads are recognizable as other characters, simply writing this fact off as re-use of head molds for saving purposes. The theory is that the portraits were, normally, regular pictures of living human beings, but that they are twisted into those ghastly forms by the ghosts in an effort to scare the guests. This is consistent with their ability to perform that kind of feat earlier in the attraction, like with the Stretching Portraits.

A final interpretation is that these are post-mortem photographs. Post-mortem photography was a very popular practice in the Victorian times, when the Mansion would have been occupied, of clothing a deceased family member's body and propping him/her up to make them look as though they are living. This theory thus states that the photos adorning the walls are of dead family members post-mortem but before they became ghosts. 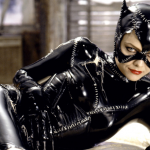 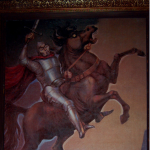