The Executioner is a character from the Haunted Mansion, appearing in the graveyard in most versions of the attraction.

The Executioner is only seen in the graveyard, standing on the right-hand side of the track, next to the Prisoner and the Beheaded Knight. He sings in a high pitched voice, while the Prisoner sings in a low pitched voice. In the WDW Haunted Mansion, his voice was re-dubbed during the 2007 Re-Haunting, and he now sings some of the lyrics differently, for instance "They begin to terrorize"  instead of "They pretend to terrorize". His voice is provided by Billy Days.

In the cast-member created Ghost Gallery storyline, the executioner was said to be a man named Rocco Jones.  In this rendition of the mansion's story, Rocco was one of four children named Carmen, Antonio and Giovanni Jones (the knight) who were all raised travelling on tour as a family of professional Opera Singers until the death of their parents.

The siblings wound up being hired to perform regularily in the Haunted Mansion for the Gracey Family and during one performance of an original opera called Don Juan in the Underworld, the pyschotic Gus Gracey (the prisoner) activated a trap door beneath Rocco's feet as he prepared to mime executing his brother Giovanni while playing an executioner.  Rocco was murdered offstage by the Prisoner and had inadvertedly also murdered his brother as he decapitated him with his axe while falling beside his brother who was laying on a prop chopping-block.  Gus had also murdered the other siblings by igniting a gas-tank which caused the stage to be engulfed with flames.

The Executioner makes a cameo in the episode House Ghosts. He appears the graveyard scaring Pete and having tea with the Hitchhiking Ghosts.

In Disney Crossy Road he is a playable character for the Haunted Mansion stages as-well as an NPC enemy when playing as the Beheaded Knight. 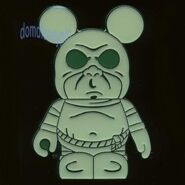 Pin based on the Vinylmation of the character.

The Executioner in the House of Mouse

The Executioner having tea with the Hitchhiking Ghosts

The Executioner scaring Pete
Add a photo to this gallery
Retrieved from "https://hauntedmansion.fandom.com/wiki/Executioner?oldid=16927"
Community content is available under CC-BY-SA unless otherwise noted.