"Yes, my dear heart; I will marry you. I will love you for all eternity. And tonight, at last, we will be together. I do!"

Elizabeth Henshaw is a character portrayed by Marsha Thomason in the 2003 film, inspired by the ghostly Bride from the attraction.

Elizabeth Henshaw was the multiracial daughter of a servant at Gracey Manor. She fell in love with Edward Gracey and they planned to marry. She was murdered by the butler Ramsley, who gave her a poisoned cup of wine. After she died, her spirit remained in the mansion as an orb (or "ghost ball"). Ramsley also gave Master Gracey a false letter from Elizabeth that he had penned himself. (Elizabeth's real letter says that she loves Master Gracey, and that she will marry him.)  This false letter led Master Gracey to believe that Elizabeth had never loved him, which caused him to hang himself from the ceiling of the mansion in his grief. But despite the letter, he still loves her, and anxiously awaits her return, which was prophesied by a gypsy woman named Madame Leota.

Unknown to her husband, her spirit remained in the mansion, manifesting as a ghost orb. She's first encountered by Megan and Michael Evers, and they lead them to the attic, where they discover her portrait. They meet Ezra and Emma and they tell them what happened to her. Thus, Megan, Michael, and their father Jim must find out the truth, or their mother, Sara, will follow in her footsteps.

When the truth was made known about what Ramsley had done to Elizabeth, he was pulled into Hell and she was released from her orb form. She reunited with Edward and they ascended to Heaven with the rest of the spirits. 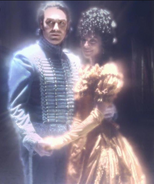 Add a photo to this gallery
Retrieved from "https://hauntedmansion.fandom.com/wiki/Elizabeth_Henshaw?oldid=13964"
Community content is available under CC-BY-SA unless otherwise noted.