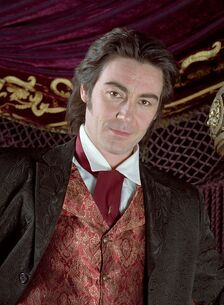 "Of course, you are all more than welcome to spend the night here."
—Edward Gracey to the Evers family

Master Edward Gracey is was ghost of the former master of the Haunted Mansion in the movie's continuity.

He is a mashup of elements from the Aging Man, Master Gracey, Master George Gracey Jr. from the Ghost Gallery, and the Ghost Host.

The son of George Gracey, Lord Edward Gracey was the master of Gracey Manor in the 1890's. He overly trusted his bigoted butler Ramsley, who was something of a father figure for him, and one day fell in love with a beautiful young mixed-race woman called Elizabeth Henshaw who was of very low social class.

Being a racist, Ramsley became desperate to prevent what he saw as a disgrace to the Gracey family. On one night, Ramsley murdered Elizabeth using a poisoned goblet of wine, while claiming to Edward that it was suicide. Heartbroken, Edward hanged himself.

The evil butler's crime and the two consecutive deaths set a Curse on the Mansion, causing it to become haunted. Edward's ghost dwelt the rooms of the Mansion for decades on end, languishing for Elizabeth, with whom he had not yet been reunited, as the wicked Ramsley had ensured. Finally, the mortal Evers family's efforts exposed Ramsley's schemes, reunited Edward and Elizabeth, and broke the curse. Finally free, Edward's soul then ascended to Heaven.