Disney Kingdoms is a line of comics printed by Marvel comics in conjunction with Disney. Based on the themes, characters and story lines present in Disney's original attractions at the theme parks (and even on unused attraction concepts, in some cases), the comics tell stories that expand on these existing tales.

Of particular relevance to this Wiki are the stories told in Seekers of the Weird and The Haunted Mansion.

There are some inconsistencies between the cannon presented by Disney Kingdoms and the established cannon of the Haunted Mansion and Disney Parks. 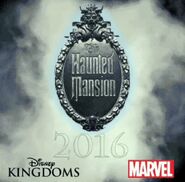