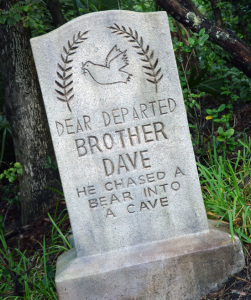 Dave is a ghost whose name appears on a tombstone of the Family Plot.

Dave, whose unknown brother or sister outlived him and wrote his epitaph, was apparently a notorious hunter. One day, hunting a bear, he chased him inside a cave, where the bear presumably got the best of him.

Since he is in the family plot, he was presumably from the family that owned the Mansion back in the day, likely the Gracey family.

Alternate tombstone for Brother Dave with the Traveler's face carved on it.

Dave Burkhart.
Add a photo to this gallery
Retrieved from "https://hauntedmansion.fandom.com/wiki/Dave?oldid=15231"
Community content is available under CC-BY-SA unless otherwise noted.