Constance Hatchaway, better known as The Black Widow Bride, is one of the ghostly characters within The Haunted Mansion, which appears in Disneyland in California, and in Walt Disney World in Florida. She is arguably the most villainous and/or most dangerous presence on the ride, being the ghost of a bride with a murderous past life.

She is a revamped version of the original Bride character that was introduced in 2006. Also in 2006, the Attic area she can be found in was also redesigned to reflect the new character interpretation and darker tone.

Her performance model is Julia Lee, and she is voiced by Kat Cressida.

The original attic area featured black lights and blast up ghosts that would occasionally spring out to scare visitors. The Bride would be swaying in the corner with a beating red heart seen within her.

In May 2006, the show scene was redesigned to include new effects and introduce a darker storyline. This included scattered and stacked wedding gifts along with portraits of the redesigned Bride and her husbands. However, in each portrait, the husband's head would disappear and the Bride's voice would admit to beheading them. The Doom Buggies would then head for the window, where the Bride would be standing, reciting her wedding vows while a hatchet materialized and vanished in her hands. The Doom Buggy then goes out the window to the Graveyard, implying escaping from the ghost.

Part of Constance's character originates from the Marc Davis designed Stretching Room portrait of the old woman on her late-husband's tombstone. In a deleted 1968 script by X. Atencio the portrait is referred to as being "Widow Abigail Patecleaver" but this history was discarded.

In the photos found in the Attic, Constance (in life), was a beautiful woman with pale skin and blonde hair. In her later years, as seen in her Stretching room portrait, her hair became grey and her stature shrunk.

As a ghost, Constance can be seen in her wedding dress holding a hatchet. Her entire body and clothing is blue and opaque, and she has a permanent evil grin on her face.

While her full backstory purposefully remains a mystery, many details are revealed in the Attic scene.

Constance Hatchaway was a beautiful woman who sought to obtain wealth and luxury. She accomplished this by marrying several rich men, including bankers, businessmen, farmers, and barons. However, each was murdered after the wedding by the deadly bride, decapitated with a hatchet so that she could claim their inheritance. Despite her crimes, she was never punished (likely due to lack of evidence), though the public did dub her "The Black Widow Bride".

It was her final husband who was one of the many owners of the titular mansion. After murdering Hightower, Constance decided that she was satisfied with the wealth she had accumulated and settled down in her newly inherited mansion. She died later of unknown causes, though most speculate that it was old age.

After her death, Constance's spirit became enveloped by her sadistic, homicidal side. She became a permanent resident of the mansion's attic, standing among her hordes of past wedding gifts and admitting to her crimes.

While her personality in life is never fully revealed, it can be assumed that she was greedy and cold towards her victims. It is unknown if she felt any remorse, but due to her repeated murders, it is highly unlikely. Somewhere down the line, she began to enjoy the killings and became a sadist, openly loving killing her husbands.

After death, her ghost was completely consumed by her murderous side, as she gleefully admits to her murders and threatens to kill the visitors.

At the Liberty Square Mansion Constance is first alluded to in the newer interactive queue, a realistic looking engagement ring is embedded into the ground. This was put into the new queue as previously there had been a cut off stanchion that resembled a diamond ring in the cement outside the Mansion, and fans speculated that it belonged to the original Attic Bride. Some stories say that she threw the ring to the ground in some kind of fit of rage.

Constance then appears as a portrait in the Stretching Room. In this portrait she is shown as an old woman sitting down while holding a red rose, as the room stretches it is revealed that she is sitting atop the tombstone of her late husband George whose bust she had plunged a hatchet into. This portrait is associated with Constance due to it's similarities to the picture she took with George in 1877 as in both images; there is a husband referred to as George, both husbands share the same moustache, in both images the Heiress (Constance) is holding a red rose, and both husbands were implied to have been murdered with a hatchet by their bride.

Constance's only spectral appearance in the attraction is in the Attic sequence. Guests see it littered with wedding gifts and other expensive items Constance amassed over the years. In the background a somber, minor key version of the wedding march can be heard being played on a piano (with or without the Attic Pianist, depending on which park one is visiting) along with the faint noise of a beating human heart. Alongside the mementos are five wedding portraits each one of Constance and a different husband whose head disappears and reappears. Finally, guests see the ghost of Constance standing beside a portrait of her and George along with an old wedding cake, and the Bride brandishes her hatchet from thin air while making darkly humorous remarks at her past life of crime.

In the unofficial Ghost Gallery Storyline (which was created before the merging of the Attic Bride and the Black Widow Portrait) the woman in the stretching room portrait was said to have been the Ghost Host/Master Gracey's mother, Mary Gilbert Gracey and that she murdered her husband after learning he had an affair.

Meanwhile the identity of the Bride character was referred to as Emily Cavenaugh, the 16 year old second bride of Master Gracey who was murdered Gracey's former lover Madame Leota who locked Emily in the chest she was hiding in during a game of hide-and-seek, resulting in Emily suffocating to death.

Because Constance was introduced to the attraction midway through the series's run, only the retconned stretch portrait appears in the series, in the story "Room for a Thousand". As a result of the comic's cancellation, she would be the only Stretching Portrait character to not receive their own backstory comic. A possible reference to Constance does exist in the crowd shot ending page of Doom of the Diva, as the bride dancing with William Gracey is standing next to a skull with an ax embedded in it.

Constance reappears as the main antagonist of the online game based off the ride. Here, the player must guide the 998 other ghosts, including Constance's former husbands, to safety from her.

In the 2010 video-game Epic Mickey, you play as Mickey Mouse exploring a realm called the Wasteland which is inhabited by forgotten and discarded characters. One mission in the game has you investigating the absent Constance Hatchaway who is identified as having been the former mistress of the game's Haunted Mansion of Lonesome Manor in Bog Easy. To complete this mission, Mickey must travel to the manor and find her hatchet to return to detective Horace Horsecollar.

A portrait in Lonesome Manor's Stretching Room shows an elderly Constance sitting atop the tombs of the Singing Busts, possibly implying that they were her husbands in the Wasteland. It is also worth noting that her attic had been transformed into the laboratory of the evil Mad Doctor.

Constance appears in a short stage show at Disneyland that was held as a hard ticket event for the Haunted Mansion's 40th anniversary. The show was about her demise and shed some light upon the subject, but was gleefully inconsistent with the Stretching Portrait, since it featured her dying pretty young. It is generally considered non-canonical due to this.

Constance appears as the final boss in the Haunted Mansion minigame. Her appearance is based on the original Beating Heart Bride.

Constance appears as a major antagonist in the miniseries, a looming threat avoided by the other ghosts. She tries to get the main protagonist Danny Crowe to marry her when he enters the attic, claiming she committed her past crimes simply because she loved weddings. It is also revealed that because she was one of the few spirits to actually die on the property, she has a certain authority and power on the grounds; most notably, the ability to permanently destroy other ghosts by decapitating them with her spectral hatchet. Ultimately, it is Constance who is able to defeat the villainous Captain, cutting off his head.

As revealed in a flashback, Constance was prepared to marry a sixth husband after George in 1879, despite rumors of what really happened to her previous five. Constance's mother - who bears a striking resemblance to the woman in the "Abigale Patecleaver" stretching portrait - was on hand for the preparations, and seems to believe Constance is innocent, if unfortunate. The Captain believes Constance died at the hands of that sixth husband, but is unsure if this is actually true.

Though Constance never makes a direct appearance in the Ghost Post interactive game, her presence is felt in the greater story. A wedding invitation (for her marriage to the the Marquis de Doome) was among the first set of artifacts sent to players, which when chilled transformed into invitation to the diplomat's funeral. She is mentioned in a conversation heard between the Hitchhiking Ghosts over the Phantom Radio (with Gus wildly swinging around a hatchet as they do). It is also very heavily implied that Constance is behind the "Aunt Agony" advice section of the Grim Gazette, since the author makes frequent allusions to having had multiple husbands who died under unusual circumstances.

Constance is a rare character who will make appearances at special events pertaining to the Haunted Mansion.

Constance was one of the rarer unlockable characters in a brief weekend challenge.

The Bride is an unlockable emoji character in the mobile game, whose power up feature is to eliminate a horizontal row of emojis from the game board with a sweep of her axe.

The Haunted Mansion: Frights of Fancy

Constance appears in the IDW graphic novel, playing the role of the main antagonist, though more in the capacity of a domineering "queen bee" figure then the homicidal maniac seen in other versions.

Constance is an unlockable character as part of the Haunted Mansion collection in Disney Magic Kingdoms. She is referred to as "The Bride" in this mobile game.

Due to unofficial stories such as the Ghost Gallery and the SLG Comics, there has been some dispute regarding whether Constance and the original "Beating Heart Bride" are the same character or in fact two separate ones. The Arguments typically being for each respective side of the argument:

Concept-art by Marc Davis of a Changing Portrait of an axe-murderess, which served as inspiration for Constance's update as the Attic bride.

The Stretching Portrait in which Constance originally appeared. 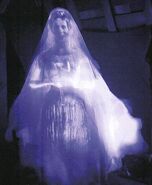 Constance as the ghost of the Attic.

Pin of Minnie Mouse as Constance.

Constance with the Marquis De Doome. 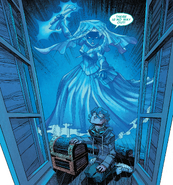 Constance about to kill Danny Crowe in the Marvel comics. 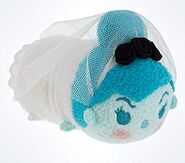 Costance in IDW's The Haunted Mansion: Frights of Fancy comic

An actress playing Constance Hatchaway during a Meet n Greet

In the Magic Kingdom DLC of Minecraft Bedrock Edition
Community content is available under CC-BY-SA unless otherwise noted.
Advertisement