The Coffin Occupant is the undead corpse trapped in a coffin in the Conservatory.

The ghost is trapped in a long, black coffin. Gnarled hands grasp the end, pushing the lid up in an attempt to escape. Several jagged nails protrude from the coffin's lid.

As the guests arrive in the Conservatory through their Doombuggies, the Ghost Host warns them that "unfortunately, they [the happy haunts] all seem to have trouble getting through. Perhaps Madame Leota can establish contact; she has a remarkable head for materializing the disembodied."

The Coffin Occupant's inability to leave his mortal remains and wander free from the coffin demonstrates this, as he desperately calls the guests for help: "Lemme out of here! Lemme out! Lemme out! Lemme out of here!" Following which, the guests move on to the Séance Room, where their presence and "sympathetic vibrations" allow the ghosts to finally materialize. By this point, the Coffin Occupant is presumably freed.

In Haunted Mansion Holiday, a Scary Teddy can be seen on top pf the coffin, trying to hammer the nails back into the coffin.

In the Ghost Gallery, he was a wealthy plantation owner named Jamie Padgett who became engaged to Little Leota however was deluded into thinking he was a vampire by her secret lover Nicholas Crown, so that he willingly hid inside a coffin from the sunlight. One evening his bride then nailed the lid shut over the poor man, causing him to spend seven days trying to escape only to die of starvation.

It is implied that the plantation he owned was the Ghost Gallery version of the Antebellum Mansion.

In the SLG comics, he was revealed in the story Blueprint for Murder to be Mr. Davis, one of the architects who built Gracey Manor in the first place.

The character inspired the Mausoleum Crypt scene from the 2003 film adaption wherein the protagonists are attacked by its undead residents. The key-bearing corpse lying in a coffin located at the center of the crypt is a nod to the Coffin Occupant.

Here, he is said to be none other than Frank Banks, one of Constance Hatchaway's unfortunate husbands.

He cameos in the Conservatory sequence of the video game Kinect Disneyland Adventures where his coffin is raised on a pedestal in a much larger version of the Conservatory as the player is chased by the Knight. 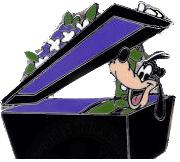 Goofy as the coffin ghost in a merchandise item.

Flash picture of the conservatory.
Add a photo to this gallery
Retrieved from "https://hauntedmansion.fandom.com/wiki/Coffin_Occupant?oldid=16463"
Community content is available under CC-BY-SA unless otherwise noted.