In Anderson's proposed backstory, Captain Gore married a young woman named Priscilla and murdered her after she discovered he was a bloodthirsty pirate. In one version, Priscilla's ghost haunted and tormented him until he finally hanged himself from the rafters. The suicide by hanging became an aspect of the Ghost Host character in the final attraction, many years later.

In another version of Anderson's backstory, the captain drowned at sea—an idea that carried over to the "Mariner" character, who himself served as inspiration for the cannon character of Captain Culpepper Clyne.

Despite being an ultimately unused concept, the character of Captain Gore has persisted as an inspiration and reference, both in the parks and in other media.

On the hillside near the entrance to the Mansion in Liberty Square is an epitaphless tombstone with the name Bartholomew Gore. This tombstone debuted in 2011 outside of Walt Disney World's Haunted Mansion as part of the interactive queue installation.

Three piratical sea-captains appear within this cast-member created backstory for the Haunted Mansion although none are clear parallels to Gore.

The mansion is explained to have served as a hub and burial-ground for pirates during the 18th century with two in particular being: Whitebeard and Francis Xavier.

In the SLG comics, the ongoing Mystery of the Manse saga was inspired by the Captain Gore backstory, though the character was called Captain Blood, a pseudonym used by William Gracey. The main differences in the storyline was that in this version the bride figure was killed by the Hatbox Ghost (the ghost of one of the Captain's victims) rather than the captain himself and the ghost who summoned the ghosts of his victims in the first place were Madame Leota rather than the bride.

Bartholomew Gore's name is used in Three of a Kind by a pistol wielding gambler appearing to be William Gracey that chases the Quicksand Men out of a tavern after cheating in a card game, causing them to wander into the swamp and sink into said quicksand.

The major antagonist of the comics, a spirit known only as The Captain, is heavily inspired by the character of Captain Gore, if not outright the same character. When Madame Leota first tells Danny about the Captain, the first panel to reveal his appearance shows a painting directly drawn from the Ken Anderson portrait of Gore and Priscilla.

The Captain is one of the few souls that actually died on the property: a pirate who came to the mansion on the rumor of an immense treasure hidden there, only to drown in the flooded basement before he could finish his search. His soul cannot rest until he has found the treasure, and he is embittered that he cannot leave the mansion while many of the other ghosts can. Using dark magic that he recently discovered he could wield, the Captain robbed the ghosts of their ability to haunt and trapped them within the confines of the mansion, as well as placing a curse on the Grand Hall that causes all who enter to eventually lose their memories and want nothing but to party. He also carries an enchanted cutlass that can seemingly cut through the ghostly forms of the other haunts, and has demonstrated the power to transform other ghosts into monstrous phantasms and summon torrents of water.

The Captain has several spirits that do his bidding, including the ghouls that occupy the Morphing Portraits and the pair of Duelists. He does not appear to fear Madame Leota - and in fact went as far as to smash her crystal ball and presumably destroy the medium - but he is leery of Constance, who also has some sinister powers over the house.

At the end of the final issue, the Captain is defeated when Constance decapitates him, and his head is sealed inside the Hatbox Ghost's hatbox before he can reconstitute his ghostly form.

Tales from the Haunted Mansion

Captain Gore appears in Volume IV: Memento Mori in the story "A Pirate's Death for Me." His ghost supposedly wrecked his ship, Bloodmere, on the coast of Displeasure Island, and he hid a considerable treasure there. It's also said that his left hand is actually a lobster's claw, which he used to decapitate his foes.

A portrait of an alternate version of the Mariner can be found in Lonesome Manor, the game world's counterpart to the Haunted Mansion. Unlike the normal Mariner, the one in the painting has a large ginger beard which is reminiscent of that of Captain Gore. The game is set in a fictional world called, "The Wasteland" which is populated by unused characters, scrapped versions of characters and forgotten characters so this can very likely be them homaging the pirate captain's history.

For the Haunted Mansion vynilmation line by Casey Jones, the Sea Captain from the ballroom is named, "Captain Bartholomew Gore". This line was however known for misidentifying characters (E.G., the Traveler with Phineas P. Pock). 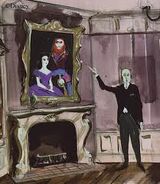 Vinylmation figure identifying him as the sea captain in the ballroom.