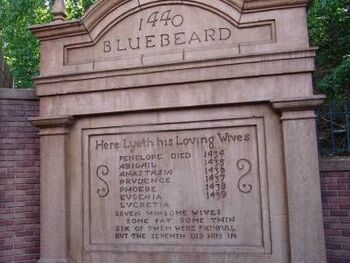 Bluebeard is one of the ghosts haunting the Haunted Mansion.

Bluebeard, who died in 1440, was a wealthy but murderous man, who killed six out of his seven wives (Penelope, Abigail, Anastasia, Prudence, Phœbe and Eugenia) from 1434 to 1439. Eventually however, his seventh wife, Lucretia, saw through his pretenses and killed him instead.

Bluebeard's ghost eventually moved to the Haunted Mansion (as one of the "famous ghosts from all over the world"), bringing his burial crypt with him; it was added to the Mansion's graveyard, where it can currently be seen.

The character of Bluebeard or Le Barbe Bleu comes from a French fairy-tale of the same name which was recorded in the 18th century by Charles Perrault. He was an aristocrat who lived in a grand palace and was distinguished by having a dark blue beard. The reasoning behind Bluebeard's blue beard is unknown but in his story he is likened to being an ogre and a fairy while it's also possible that he was a normal human who dyed his hair blue as a sign of his nobility or some fantastical mutation that caused it to be so. He is also described as being immensely hideous although some revisions of the story change it so that he is handsome and suave.

During his first marriage, Bluebeard came to murder his first-wife for an unknown reason and proceeded to keep her severed head in a room in his palace, hanging from a meat-hook. In the years that followed, Bluebeard's next five wives each came to enter the chamber against Bluebeard telling them the room was forbidden and when each did so he murdered them and added their heads to his collection. When Bluebeard's seventh wife (here named Lucretia) discovered the room he attempted to murder her but chose to let her meet with her sister Anne one last time. Anne and Priscilla proceeded to plot against Bluebeard and successfully kill him before he had the chance to kill her.

The tomb attributing Bluebeard died in 1440 correlates with the theory that the character was based on the historic 15th century murderer Gilles de Rais. Gilles was a nobleman and the Baron of Retz who fought alongside Joan of Arc and retired into a life of wealth. Following the year 1432 he was accused of depleting his wealth on grand hedonistic parties, occult rituals, and murders. After an investigation he was executed by hanging in 1440.

Retrieved from "https://hauntedmansion.fandom.com/wiki/Bluebeard?oldid=13023"
Community content is available under CC-BY-SA unless otherwise noted.