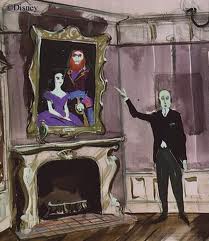 Beauregard was an unused character who was to be one of the inhabitants of the Haunted House belonging to Bartholomew Gore.

Beauregard was the name of a character from Ken Anderson's early concepts for the attraction. He was to be a living butler that would guide guests through "the old Gore Mansion".[1]

In all versions of the final attraction except for Mystic Manor, the cast members of the attraction dress as either Butlers or Maids who guide the guests through the gates, queue, front entrance, Stretching Room, Portrait Corridor, Loading Zone and Exit Crypt although never to the degree that Beauregard was supposed to guide.

In early 2004, Beauregard the Butler was a character featured in Disney's Haunted Mansion Weekend—an experience created by Disney and the AtmosFEAR! scream team in the UK.

On the hillside near the entrance to the Mansion is an epitaphless tombstone with the name Beauregard. This tombstone debuted in 2011 outside of Walt Disney World's Haunted Mansion as part of the interactive queue installation, along with a tombstone to Beauregard's master Bartholomew Gore. This seems to imply that both eventually retired to Gracey Manor like so many ghosts from all over the world

Retrieved from "https://hauntedmansion.fandom.com/wiki/Beauregard?oldid=12595"
Community content is available under CC-BY-SA unless otherwise noted.