Aunt Lucretia is the semi-official name of one of the ghosts haunting the Haunted Mansion.

Aunt Lucretia is a bust found in every Haunted Mansion except for Mystic Manor. In the New Orleans Mansion her bust is found twice in the attraction; once in the portrait corridor staring at guests as they pass by and another time on the mantle of the fireplace in the Grand Hall as a ghost sits next to her with his arm around her.

In the Hudson River Valley Mansion her bust is found three times, twice in the library as a staring bust where she is said by the Ghost Host to be one of the greatest ghost story writers that the literary world has ever known, and she appears agin in the grand hall exactly like her Disneyland counterpart. In Phantom Manor her bust appears once outside of the Grand Staircase staring at guests but she does not appear in the ballroom.

Her effect was achieved by creating an inverse of a woman's face and putting it up against a black background in a pocket of the wall to make it appear as if her bust was facing outwards. Because it is inverse no matter where you move whenever you look at the bust it appears as if it is always staring at you. 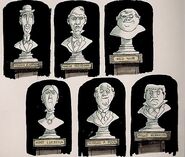 A concept art where Aunt Lucretia was supposed to be the sixth singing bust
Add a photo to this gallery
Retrieved from "https://hauntedmansion.fandom.com/wiki/Aunt_Lucretia?oldid=16409"
Community content is available under CC-BY-SA unless otherwise noted.