The Attic Bats are minor characters appearing in the Disneyland version of the Haunted Mansion ride.

The Bats are a group of black vampire bats with red eyes (numbering five to six) who dwell in the Attic. Though their red eyes may hint otherwise, they appear, at face value, to be normal bats who took up residence in the Attic after the house was abandoned. Their proximity to the Hatbox Ghost has sometimes been interpreted as their being the ghost's "pets", after a fashion.

From opening day to 2006 (2007 in the Walt Disney World version), the Attic Bats were five in numbers and were inside the Attic proper, fluttering as the guests passed by. This was achieved through the simple effect of a mobile to which the synthetic bats were attached with nigh-transparent wire. (The Bats are apparently still present in this fashion in the Tokyo Disneyland version of the ride.)

In 2015, the Bats were reintroduced in the Disneyland ride, now just outside the Attic proper, hanging upside-down from a doorframe behind the Hatbox Ghost. There are now six Bats in all, and their eyes gleam red.

The presence of "fluttering bats" (along with "spiders") in the Attic goes back to a piece of concept art by Ken Anderson in the 1950's, also the first recorded concept of the Attic itself at all. Yale Gracey created a sketch of the "bat mobile" effect to make this vision a reality.

Unrelatedly, Marc Davis had created a sketch of a large man-eating bat with red eyes hanging upside-down in a cage. This sketch (whose character has sometimes been dubbed Attila the Bat, and taken to be one of the Ghost Host's "pets") served as obvious visual influence for the appearance of the bats in the 2015 tableau. This placement of the bats in a doorway next to the Hatbox Ghost draws back to yet another sketch by Davis, showing three bats flying behind the Hatbox Ghost standing in a doorway. 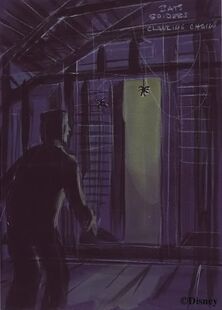 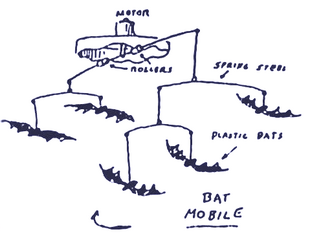 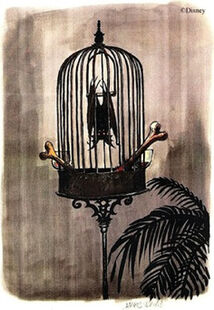 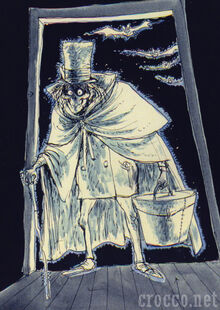 Bats flying behind the Hatbox Ghost in another Marc Davis sketch.
Add a photo to this gallery
Retrieved from "https://hauntedmansion.fandom.com/wiki/Attic_Bats?oldid=9737"
Community content is available under CC-BY-SA unless otherwise noted.