April-December is a portrait that used to be at Disneyland, but is currently at Walt Disney World and Tokyo Disneyland.

The painting depicts a lovely young woman with the word "APRIL" written in the top right corner but then ages into a hideous hag wearing the same dress and still sitting in the same position with the word "DECEMBER" written in the upper right. The painting originally began as a Marc Davis piece, where he planned to have the woman very slowly age, going through June and September phases as well.

At Disneyland, April-December was the fifth and final portrait in the Portrait Corridor, changing between April and December with the lightning flashes. The portrait was removed in 2005  and replaced by a version of the Aging Man, who was inserted into the third slot down the hall, while Medusa, who formerly occupied that spot, was put in April-December's place.

One theory regarding this is that her effect would hardly work with the updated effect which followed the morphing portraits as the elderly form wouldn't be apparent in the flashing. The other theory regards how the Haunted Mansion in the Magic Kingdom made the Aging Man portrait much more of a Haunted Mansion icon, particularly through its identification as Master Gracey.

Her portrait was reintegrated into the attraction in 2021, here being moved to the Load Area. Digital effects were used to animate her appearance.[1]

April's portrait can still be seen in miniature form as decor in the gift shop Port Royal Curios and Curiosities which themes itself around the Haunted Mansion in-addition to Disney Villains and the Nightmare Before Christmas.

The December phase of the portrait was used as one of the Sinister 11, although the word "DECEMBER" was painted over. Her eyes glowed and followed the Doombuggies down the Portrait Corridor. In the 2007 renovation, eyes were painted into her portrait and she was moved to the wall of the staircase after the Loading Area, near the Couple portrait.

The December phase-again with "December" removed still hangs in the Portrait Corridor at Tokyo Disneyland with the Sinister 11 as was the case at Walt Disney World until 2007.

She has been given the name, "The Muse" on Disney Crossy Road, as in an update where secret characters got descriptions, hers was, "Miss April, or are you December?".

In 2006, a portrait of April December's "June" appearance could be seen as part of the set of a Pirates of the Caribbean themed live performance in New Orleans Square. 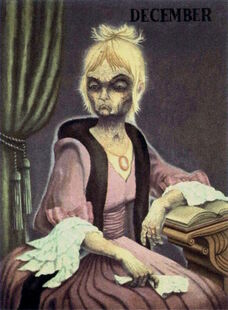 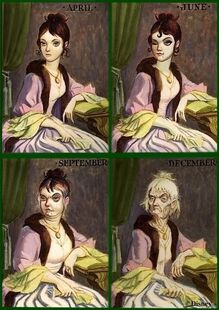 The original four phases of the Marc Davis painting. 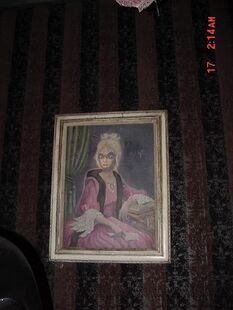 The Sinister Eleven version of December. 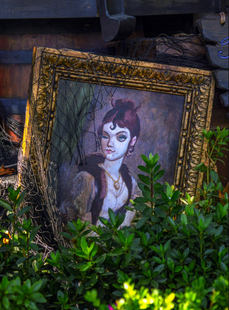 "June" Portrait appearing in a live event in Disneyland 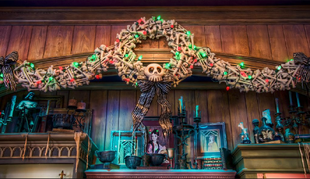 The April portrait in Port Royal Curios and Curiosities 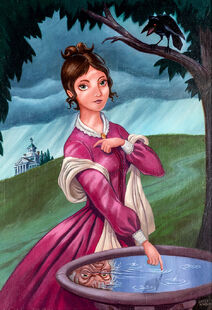