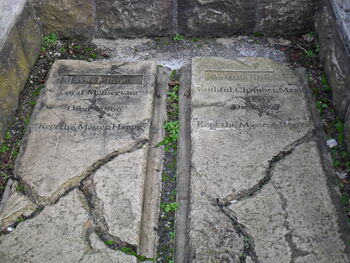 Anna Jones is a deceased character referenced in Phantom Manor.

Anna Jones worked as a servant in Ravenswood Manor along with her brother, Jasper. While Jasper was the loyal manservant to the house's owner Henry Ravenswood, Anna worked as the manor's chambermaid. In Phantom Manor's original storyline it is also revealed that as a child, Henry's daughter Melanie was forbidden from leaving the estate's grounds so growing up her only friends were the Jones siblings. While Anna's cause of death remains a mystery in both the original backstory and the final attraction, it is known that she died in 1867 while her brother died in 1866. After their deaths, Anna and her brother were buried side-by-side in the Boot Hill cemetery on the Manor's grounds.

Retrieved from "https://hauntedmansion.fandom.com/wiki/Anna_Jones?oldid=12067"
Community content is available under CC-BY-SA unless otherwise noted.