Dorian Gray
The Master of the House
Master Gracey

The Aging Man also referred to as the Master of the House and often semi-officially as Master Gracey is a character from a changing portrait in the various Haunted Mansions.

The portrait initially represents a healthy, handsome young man. However, as the guests look at it, it progressively begins to age in front of their very eyes. In about a minute, the young man is dead, and all that is left is a still-decaying corpse with blazing, haunting eyes.

The portrait hangs in the Foyer, where it slowly morphs through its four phases while the Ghost Host delivers his pre-show spiel.

As most things in the Tokyo Mansion, the Aging Man's role is copied directly from the Walt Disney World version.

Although initially absent from the Disneyland Haunted Mansion, where its purpose was essentially fulfilled by Miss April-December's portrait, the portrait was eventually added in the 2000's, next to the other changing portraits in the gallery, taking the spot formerly occupied by April-December. This decision was presumably a homage to the prominent place the "Aging Man = Master Gracey" concept had taken in the fans' mind (see "Behind the Scenes"). This version flashes between young and skeletal like the other Portraits, rather than shifting progressively as did its Walt Disney World counterpart.

The Aging Man's prominent position in the Foyer, coupled with its transformation as the Ghost Host welcomes guests, can imply that this portrait was that of a former "Master of the House", and very likely of the Ghost Host himself - in some early attraction concepts, the Ghost Host was supposed to talk from a bust located above the fireplace, and introduced himself as "the Master of the House." Fans have frequently associated this composite character with "Master Gracey," a name on a Tombstone in the family plot, based on an incorrect interpretation of the term "master", which was meant to be the 19th century usage of the term for a male too young to be called "mister". In spite of this, the dual link found its way into various merchandising items, and the Aging Man was used as the basis for the appearance of "Master Gracey" when he officially appeared, in the SLG comics and in the 2003 film.

The portrait is inspired by the fictional character of Dorian Gray, a self-absorbed aristocrat who sold his soul in exchange for eternal youth and beauty on his body with physical changes only being shown on a portrait which he had commissioned of himself. Over the years Dorian became a misogynist, a blackmailer and a murderer and he ultimately died after becoming obsessed with being a better person and stabbing his own portrait when learning that it hadn't changed to show him as beautiful again, resulting in Dorian dying as an ugly old man and the portrait being restored to its former beauty. 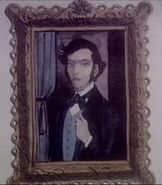 A comic version of the master

VInylmation pins
Add a photo to this gallery
Retrieved from "https://hauntedmansion.fandom.com/wiki/Aging_Man?oldid=12881"
Community content is available under CC-BY-SA unless otherwise noted.